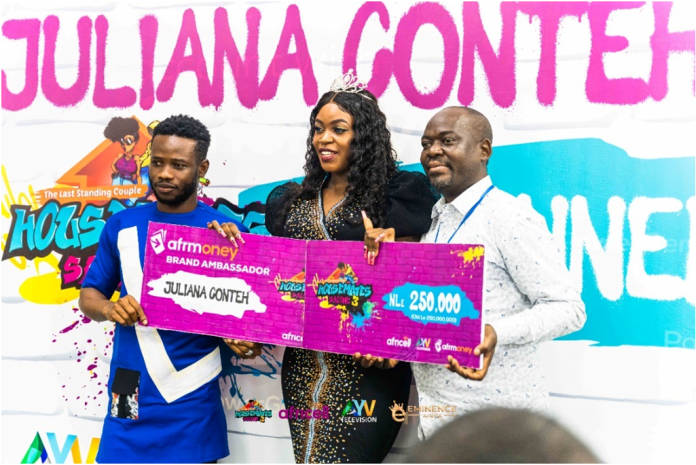 As part of fulfilling their commitment towards successfully rolling out the Housemate Season 3 Reality TV Show, Africell Sierra Leone and the African Young Voices Media Empire (AYV-TV) has on Friday 19th August 2022, handed over the Star Prize of Two Hundred and Fifty Million Leones (Le250 M Old Leones) to Juliana Conteh aka Julie Tombo, the winner of the competition. The official handing over ceremony took place at Africell Headquarters on Wilberforce in Freetown.

Additional prizes were also given to other competitors. The first runners-up received Le 5,000, in other words Le 5M cash, an Africell 4G Mi-fi with unlimited data and a Le 250 in other words Two Hundred and Fifty Thousand Leones (Old Money) airtime monthly subscription for 6 months.

In his opening statement, the Media and Marketing Officer at Africell Sierra Leone, John Konteh, gave an overview of the just concluded Reality TV show in Sierra Leone, stating that it was a hectic and thrilling process leading to the show, from the announcement to the audition, to the show itself. “It was an exciting nine weeks of entertainment and education in this year’s edition of the show.”

The Media and Marketing Officer furthered that the event was occasioned to fulfill the promises made to the contestants, especially the winner.

He maintained that the handing over of the Star Prize of Le 250,000 (Le250 Million Old Leones) to Juliana Conteh is a fulfillment of their commitment towards the show, adding that they also promised that the winner will be taken on a vacation trip to Dubai, which he revealed was fulfilled underscoring how the handing over ceremony of the Star Prize is also a fulfillment of another promise.

Representing AYV TV, Samuel Wise Bangura described his institution’s (AYV) relationship with Africell as “a family relationship” – as they share similar values and goals to promote entertainment in Sierra Leone.

He said that the CEO of AYV ,Anthony Navo Jnr, will continue to commit to his promise to promote and showcase Sierra Leone through entertainment, adding that the organizers are currently planning on the upcoming edition (the Season 4), which he said will be epic.

The Corporate Affairs Manager of Africell, Joe Abass Bangura, gave a motivational address, by referencing Julie’s story as a classic inspiration to young girls and women, who felt let down in society and are ready to fight back to success.

He also mentioned that Juliana Conteh and Almon Sall have been contracted as Brand Ambassadors for Afrimoney, for winning the Mr. and Miss Housemates Salone Season 3 Pageant in the House for both male and female respectively.

In her statement, the HMSL Season 3 winner Juliana Conteh aka Julie Tombo expressed her appreciation to the Almighty for leading her to the Show and also extended her gratitude to AYV and Africell for the platform given to her and colleagues to share their stories with the people.

Julie also recognized a woman she described as a caregiver and mentor, who looked after her kids when she was away who was also delighted to see her transformation and encouraged her to believe in herself.

Expressing her delight for receiving her Star Prize and her new endorsement as Brand Ambassador for Afrimoney she dedicated the achievement to the people who supported her, her kids, her boyfriend Nohmi George and her ‘Tombolistic’ team.

The ceremony was fully attended by the organizers, the media, Ex-Housemates and fans. Presentation of the Star Prize and other prizes climaxed the event.