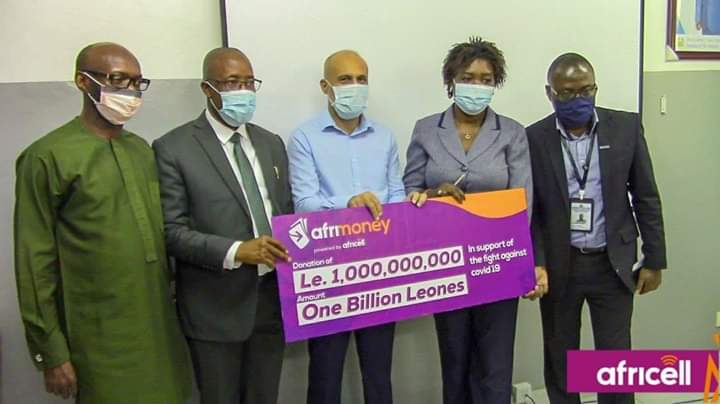 With the strong passion to always stand by the side of the Government and People of Sierra Leone during crisis periods Africell Mobile Company, on Wednesday 17th June 2020 donated One billion Leones to the Government through National COVID-19 Response Centre (NACOVERC).

The cheque was handed over to the Minister of Information and Communications, Mohamed Rado Swarray, to support Government in the fight against COVID19.

Chief Executive Officer of Africell, Shadi Gerjawi, expressed sympathy to all those affected by COVID-19 and continued by lauding the resilience of Sierra Leoneans in trying to cope with their lives during these trying times. The CEO commended all health workers whom he congratulated for the diverse ways with regards how they are working assiduously to save lives in the midst of the crisis.

He made reference to the previous donations that were made to the Ministry, highlighting the e-learning service they are providing to the University of Sierra Leone, and the various sensitization programmes on their social media platforms including the massive sensitization Afri Radio is sending out to the general public about COVID-19.

“It was in furtherance of our commitment that we decided to donate Le1Bn towards the fight against COVID-19 to assist the Government in its effort to break the chain of transmission,” Gerjawi stated.

He mentioned that as a leading mobile phone company in the country, they are very much concerned since the outbreak of the virus maintaining how they have been supporting Government to control and win the fight.

He disclosed how they have donated medical supplies, like PPEs, hand sanitizers, face masks, boots, food and non-food items in addition to using their network to send messages to their subscribers to protect themselves. He said all precautionary messages prepared by the Ministry of Health and Sanitation are being cascaded to their subscribers.

The Africell CEO assured the Government that his company is committed to Sierra Leone and will do everything under their power to give support to end the virus.
In his statement, the Minister of Information and Communications, Mohamed Rahman Swarray expressed gratification that Africell has come in to make the giant donation noting how the support will go a long way to break the chain of transmission.

“We have been calling on you all to support Government and you have always come on board. This is not the first time and will not be the last time,” the Minister applauded and appealed. He promised that the donation will be used judiciously for its intended purpose.
NACOVERC Chief of Staff, Solomon Caulker also commended Africell for the donation stressing that it will indeed go a long way to win the fight.