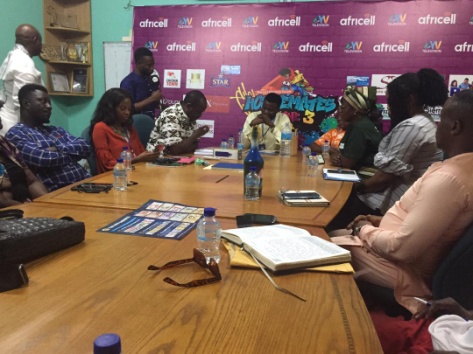 During a Press conference that was held on the 14TH of May 2022 at the AYV Conference Hall on Wesley Street in Freetown, which attracted media practitioners from various media houses and was moderated by Samuel Wise Bangura, geared towards updating members of the Press and by extension  the general public on how the TV show would be like and what had been done so far  or should be done, the Chairman of the Executive Board of AYV Media Empire, Dr. Ezekiel Duramany Lakkoh, welcomed all present especially  their partners and sponsors ,whom he said, have decided to render their services to them for the upcoming  Reality TV Show  Housemates Salone Season 3.

He pointed out that  Housemates Salone Reality TV Show happens to be one of the dreams of every Sierra Leonean and is one  that majority are looking up to in terms of entertainment in the country.

Lakkoh pointed out that within the shortest possible time, to be precise, on the 22nd May, 2022, the Reality TV Show will commence maintaining that they are reiterating their commitment towards the hosting of the third edition of Housemates Salone.

He revealed that they have team from Lebanon, an expert from Nigeria and even others from the Diaspora who have come together to ensure the smooth commencement of the event.

“We have never had any one to one discussion with any of the aspirants and so the issue of bias or prejudice does not sit in here as it will be fair competition,” he assured adding that all the aspirants, who will eventually enter the House, would be tested to know their health status maintaining that any aspirant that does not match with the health qualification of the organizers, AYV Media Empire and Africell-Sierra Leone, will be disqualified from entering the House.

Nancy, an official from Africell Sierra Leone, stated that this year’s Housemates Salone is going to be credible and standard disclosing that there would be professionals that would be part of the program.

She encouraged members of the public to continue to vote for their favourite shortlisted aspirants if they want  to see them in the House adding that Africell, as a mobile company, is so grateful and will always feel proud to be part of AYV simply for the sake of their promotion of  unity, and providing interesting contents.

Nancy also reminded viewers or members of the public not to forget to vote for their favorite aspirants by using Afrimoney to vote while at the same time  extending  appreciation and gratitude to their sponsors for partnering with them.

The Chief Executive Officer of Sing Song Medical Services, Dr. Joseph A.K Kamara, pointed out that it is very significant for the aspirants to know their health status saying which is why they will be medically testing them in order to protect the reputation of the institution further assuring that the test results will not be disclosed to anyone but will remain strictly confidential.

Acting Business Development and Marketing Manager of the Rokel Commercial bank, Mariama Jajua, assured the organizers of the Show, AYV and Africell, that they have the Bank’s full support also disclosing how they will open free accounts for all the Housemates.

The General Manager of Bet Salone, Nicolas Nicol, stated that they believe in what AYV is doing because they see it as an opportunity to push Sierra Leone out to the world further maintaining that whatever content AYV will be showing out will reflect the face of the nation also assuring of giving their full support.

A question and answer session climaxed the briefing or updating.