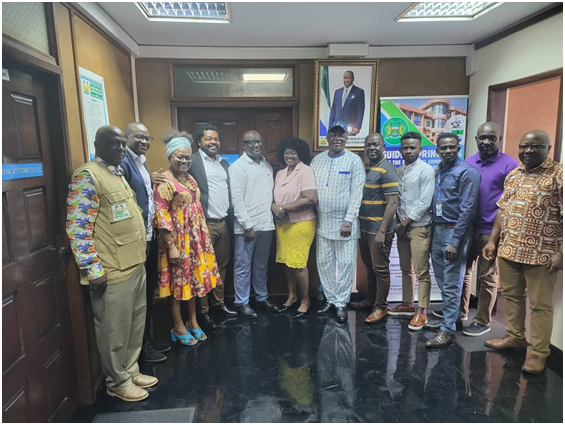 A Memorandum of Understanding (MoU) was signed on the 22nd September 2022 between the Africa Young Voices (AYV) Media Empire and the Electoral Commission for Sierra Leone geared towards using the professional services of AYV to give coverage to the 2023 electoral process.

In a short statement, Mohamed Kenewui Konneh said:  “The Partnership is in respect of the belief that all Sierra Leoneans should be part of the country’s electoral process. AYV is just like any other partner working with ECSL on its mandates”.

He continued by saying AYV is one of the institutions of  good example for the fact that Sierra Leoneans can initiate good projects and those projects become locally and internationally recognized projects.

Chairman Konneh recounted his good experience with the Chief Executive Officer (CEO) of AYV, Ambassador Anthony Navo Jr., which he said spans as far back as 2011.

He said for AYV to have reached such a successful level with a partnership with the BBC, DSTv and countrywide, ECSL is confident that the Partnership is a very good platform for the Commission to reach out not only to its Sierra Leonean audience but also audience across the world in marketing its electoral activities and also get people involved in the process.

He said the initiative can be beneficial and will add value to ECSL’s processes, adding that the amount ECSL is paying to the AYV in respect of the Partnership is a pittance for the services the ECSL stands to gain.

“With the Partnership, whenever we have an event at ECSL, our audience will not only be Sierra Leoneans at home but globally. The Commission will always be open to AYV on all elections-related issues and we look forward to more interactions and programs that will continue to let the Commission reach its audience targeted,” Chairman Konneh stated.

In his words, AYV’s Director of Communications, Samuel Wise Bangura pointed out that the Partnership came by no mistake adding that AYV also partnered with the National Electoral Commission back then in 2018.

According to him, AYV professionally handled the 2018 presidential debate alongside other partners and also gave credible, factual, and balanced reportage on the entire electoral process.

He recalled that in 2018, local and international elections observers recognized AYV as the most credible media institution that gave equal opportunities to every political party in the country.

Samuel Wise Bangura assured that AYV can now go the extra-mile by doing better with its ultra-modern equipment to give the ECSL and the people of Sierra Leone seamless broadcast with guiding professional ethics and principles.

Importantly, he hammered home that the partnership will only see the AYV partnering with ECSL and not to collude with the Commission in the sense that AYV will not be  ECSL’s mouthpiece but has the mandate to complement all ECSL’s efforts geared towards credibility, fairness, and impartiality.

“We will help to create transparency which we always stand for at AYV. We are the only media house in Sierra Leone with 3 television channels, a radio frequency, and a daily newspaper with nationwide coverage and online services. We pride ourselves as the nation’s most trusted news sources, simply because we have guided and guarded ourselves in ways that put us as a home of all things credible, factual, and all-time balanced news,” he stated.

Also in attendance at the signing ceremony were NEC’s Commissioners for South and East and other senior staff of the ECSL. AYV’s General Manager, Office of the CEO, Directorates of the News and Current Affairs Department, and Communications, Marketing, and Digital among other senior management staff of AYV.

Amb. Navo Nominated as Africa Media Entrepreneur of the Year

AYV DSTV Channel 399 Takes Sierra Leone to the Outside World

As it Goes Continental…   AYV Now on DSTV Africa Channel 399