Six (6) strong members of opposition Coalition for Change (C4C) party, have on Sunday, 13th October, 2019 surrendered their allegiance to the ruling Sierra Leone People’s Party (SLPP) at the SLPP office in Kono. Among those who declared for the SLPP was the present Deputy Minister of sports, Lawrence Mbayo and five other strong members.

“Haven seen H.E Bio fight against corruption and the boost to free quality education across the country, we believe the SLPP is the only party capable of bringing the desired change Sierra Leoneans have long yearned for” he said.

Witnessed by a cheerful crowd, the first lady, Madam Fatima Bio, welcomed the former C4C political stalwarts and said that they made no mistake to choose the SLPP as it is the only party that will change the narrative of Sierra Leone and make the future bright for all.

She said the SLPP embraces all as a family and by virtue of her being an indigene of Kono District,she is happy to receive her brothers open handedly for the progress of the country.

“Our party slogan says ‘One People One Country’, which greatly signifies that we should all be brothers and sisters for the sake of Development. The entire membership of the Sierra Leone People’s Party wholeheartedly welcomes you and we’re happy you all made up your minds for the sake of progress” she concluded. 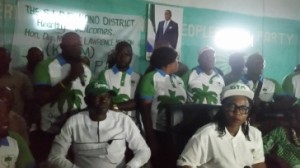 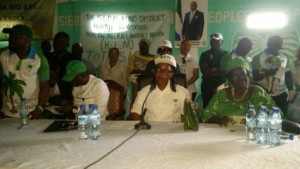