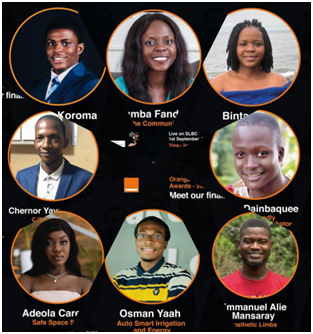 The 4th Edition of the Orange Social Venture Prize (OSVP) pitch event will take place on the 1st September, 2022 in which eight (8) finalists will participate for the whooping sum of One Hundred and Fifty Million Leones (Le150M).

It will be recalled that as part of their efforts to promote local innovation for development, sustainability and business development growth geared towards transforming the lives of young innovators in the country, one of Sierra Leone’s leading telecommunications service providers, Orange Sierra Leone, in partnership with Innovative Sierra Leone on the 6th April, 2022 launched the 4th edition of the Orange Social Venture Prize in Sierra Leone and 12th edition in Africa and the Middle East during an auspicious event held at the company’s headquarters on Hill Station in Freetown.

In her address during that occasion, Head of Public Relations at Orange SL, Annie Wonnie Katta expressed delight,on behalf of the company, to launch the 4th Edition of Orange Social Venture Prize (OSVP) in Sierra Leone, adding that as a mobile telecoms company they are poised to be the lead digital partner for start-ups in Africa and the Middle East furthering such was the rationale why Orange Middle East & Africa (OMEA) initiated the OSVP 12 years ago in order to reward the best technological projects that will positively impact and provide solutions to social challenges mainly in the fields of education, health, agriculture, mobile payments or sustainable development in Africa and the Middle East.

She also intimated that the competition is organized annually in all 17 Orange affiliates in OMEA and that the three winners from each of the 17 countries are availed the opportunity to compete in a grand international contest were 1 out of the 51 contestants will emerge as the winner adding that the International winner will bag a whooping sum of 25 thousand Euros.

“Orange Sierra Leone joined the OSVP Challenge in 2019, three years after joining the OMEA family. We have successfully held three national competitions in 2019, 2020 & 2021 respectively. The 2019 winner, Aminata Kandeh, and the 2020 winner, Bayoh Turay won 10 million and 20 million Leones respectively to support the growth of their businesses.

She said today Aminata is a proud owner of a thriving Agro-Fish farm in Bo while Bayoh Turay is now gainfully employed by Orange as a trainer in the Orange Digital Centre where he is providing his expertise in coding and mentorship to young aspiring innovators,” she informed the audience at that time.

The Head of Public Relations continued by stating that in 2021 they accelerated the tempo of OSVP with the support of their Partner, Innovation Sierra Leone to bring more meaning to the innovation axis and increase empowerment for young start ups/innovators/entrepreneurs in the country, continuing that out of a total of 128 applicants, Haja Isata Bah of ‘Uman for Uman’ emerged as the Winner of 2021, with a prize of 100million Leones to improve her business that is positioned to support women and girls by ensuring availability and affordability of recycled menstrual hygiene pads.

She continued that also in 2021, they introduced an additional prize to increase female participation and to promote projects offering technological solutions to improve the living conditions of women adding that in the new category, Sia Chaywai, emerged as the winner with a 50 million Leones grand prize to support the enhancement of her mobile clinic project.

The Managing Director of Innovation Sierra Leone, Francis Steven George, underscored how the partnership is to identify, support, and promote digital talents, instigators for change in digital marketing.