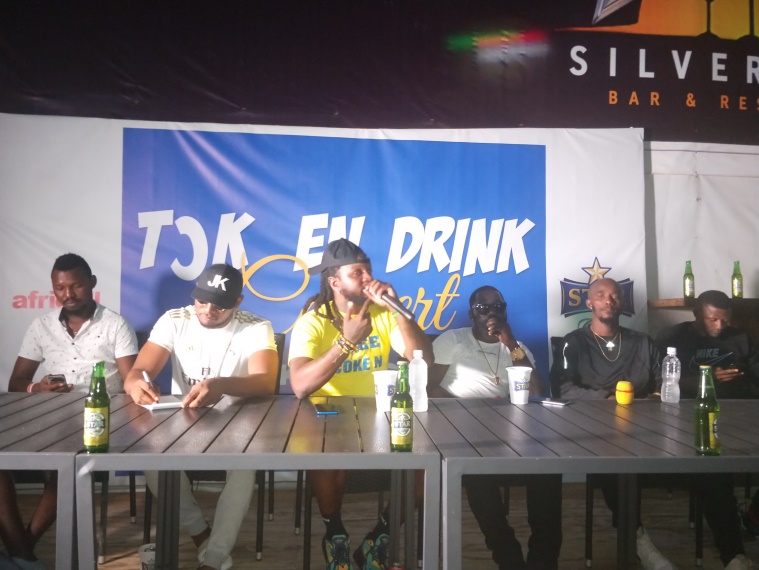 This disclosure was made during a press conference held at Silver Star Bar & Restaurant on Lumley Beach Road in Freetown.

In his address to those who graced the media engagement, Alhaji Amadou Bah, popularly known as King Boss LAJ disclosed that the upcoming “Tok En Drink Concert”  is geared towards giving back to society, adding that after the show 30% of the proceeds will be donated to the less privileged especially those who were affected directly by the 11 year civil war in Sierra Leone.

He assured Sierra Leoneans of the very best in entertainment assuring that come the day for the “Tok En Drink Concert” it is going to be performances exclusively by Sierra Leonean artists from all record labels.

He recalled that on January 6, 1999, the Revolutionary United Front (RUF) entered the capital city of Sierra Leone, Freetown, as part of efforts to overthrow the government by then, adding that they randomly massacred  fleeing civilians, burnt down homes, committed rape, amputated limbs and gouged out eyes noting that they brought down an almost arbitrary wave of ruthless terror on Freetown that claimed more than 7000 lives.

He said against such a ghastly backdrop,  the event will look at supporting the less privileged and victims of the civil war in Sierra Leone, noting that during the past years he had been hosting the event on the 6th January but this year the show will be hosted on the 10th January 2020 at the Siaka Steven Stadium in Freetown.

He called on his colleagues to support him in the upcoming event, adding that he is going to ensure that all artists who will perform during that show will be paid, which he said will change the mentality of artist in the entertainment industry.

He called on all Sierra Leoneans to see January 10 as their own show and assured of a tight security presence.

All Star President, Milton Koker, popularly known as Colabo commended King Boss LAJ for the initiative in order to promote the entertainment industry in the country.

He said that the entertainment industry has come a long way and is now trending, adding that with support the industry will create considerable impact in the country.

He said the January 10 ‘Tok En Drink Concert’ is a clear manifestation of the development initiatives from the entertainment industry reiterating how 30% of the proceeds will go to the less privileged as the event is geared towards giving back to society. Towards that end he called on the entertainment industry to support the initiative in order for it to become a success and a record breaking event in the country.

On behalf on the All Star team he further assured King Boss LAJ for their full support towards the success of the said event. He called on the promoters, DJs, Artists etc. to support the upcoming ‘Tok En Drink Concert’.

Head of Entertainment of Afriradio, Abdul Lawal, known as Master Jaye also applauded King Boss LAJ for the initiative and for his support towards the entertainment industry in the country.

He called on members of the entertainment industry to make it a success story and personally committed himself to support the concert.