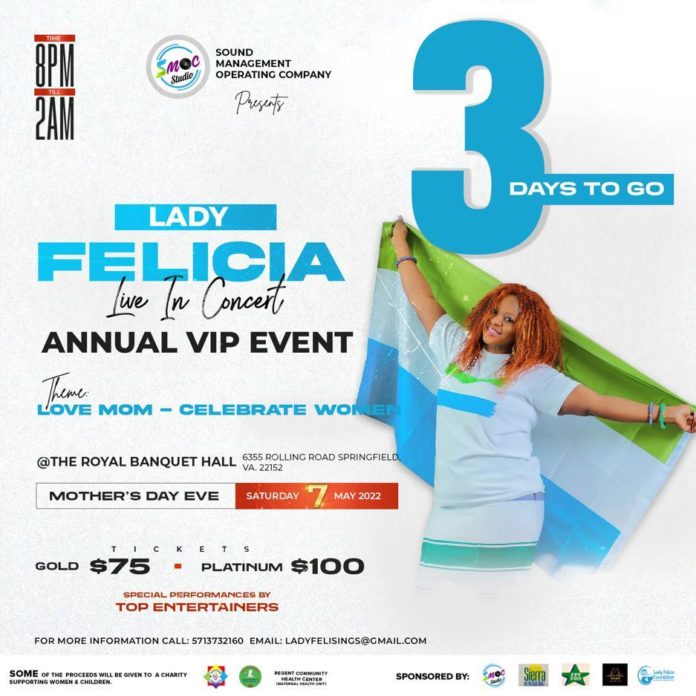 One of Sierra Leone’s most outstanding female musicians, Lady Felicia Grant, popularly referred to as the Princess of Sierra Leone is set to host a musical concert, scheduled to take place on  the 7th May, 2022 at the Royal Banquet Hall 6355 Rolling Road Springfield, Virginia, VA, 22152.on the theme: “Love Mom Celebrate Women”. The musical concert will feature other top Sierra Leonean musicians in the United States of America.

Lady Felicia used to be part of the “Ladies Day Out” (LDO) of which her songs include ‘No Condition is Permanent’, ‘Jesus Me Lajor’, ‘Home Salone’, ‘Homeless Children’, ‘Sweet Salone’, among others.

Speaking to this medium during an online interview, Lady Felicia Grant said that the concert will feature other top Sierra Leonean musicians in the United States of America.

She added that hosting such an event is geared towards celebrating women disclosing that she’s not alone on it but alongside other supportive organizations including the Sound Management Company also maintaining how proceeds from the concert will be donated to support the works of  the “Sick Pikin Project” and the “Sierra Leone Autistic Society”.

Worthy of note is that Lady Felicia Grant in 2018 established her Foundation to support and promote child related activities, rights and welfare (Findings) and now she is a veteran musician per honour based on her long experience in music.

She started creating music sometime in 2000 with a group called, “Ladies Day Out” before she went solo into producing and releasing  her two greatest songs respectively: “Song for Mama” and “Sweet Sierra Leone” which were indeed great hits.