Majority of Lebanese nationals based in Sierra Leone have dissociated themselves from the inflammatory statements made by one Adnan Antar who is also known as “Lebanese Adebayor” dismissing his activities and more especially his utterances as mere acts of “gangsterism”.

It is important to note that members of the Lebanese Community have never meddled into the political affairs of this country which therefore means that Adnan Antar and his cohorts are only working in their own interests.

Members of the Lebanese Community in Sierra Leone are law abiding and have contributed positively to the socio-economic development of the country. It could be recalled that recently after the outbreak of the corona virus in the country members of the Lebanese Community contributed immensely in supporting the efforts of the Government of Sierra Leone to help scale-up the fight against the virus.

It has emerged that the clown who calls himself Lebanese Adebayor (Adnan Antar) is being allegedly supported by Ali Basma popularly known as Mukhtar, who doubles as the owner of Lion Travel Agency.

Another gang member is Ashraf Akkad who is the registered owner of Akkad Service Center who allegedly regularly deals in stolen cars. He was deported from Lebanon as a Palestinian suspected of involvement in several criminal activities and has two names, Ashraf which everyone knows and Ibrahim on his official Passport.

Another alleged partner in crime is Ahmad Akkad. He is well-known for allegedly duping Chinese Timber investors in Sierra Leone.

Ali Basma is also suspected of being one of the greatest fans of the clown and nonentity who calls himself, Lebanese Adebayor.

Adnan Nassim, the owner of Adnan’s Supermarket is also one of the greatest fans of Adnan Antar.

Two months ago, some of these guys mentioned above were arrested by the Police and detained at the Pademba Road Central Prison for sharing the vile videos put out by the Lebanese lunatic who calls himself, Adnan Antar. They were later released on bail after Nabih Basma stood as their surety.

The Ali Basma faction created Adnan Antar (The Lebanese Adebayor) and they are now using him to undermine the security of the State by threatening the lives of decent people in this country including President Julius Maada Bio.

The good news is that the Ali Basma group is in the minority and they do not represent the views of the majority of the membership of the Lebanese Community in Sierra Leone.

Many have suggested that the Government should find a way to contain these Lebanese trouble makers in the country by using the full force of the law.

The latest video of Adnan Antar, threatening the above mentioned personalities as the ones that are threatening him was a deliberate ploy to divert public attention from the diabolical plan to undermine the security of the State.

It must be reiterated that this so-called Lebanese Adebayor, who resides in London, has been threatening even the life of His Excellency President Julius Maada Bio. Recently, he conspicuously took an active part in an Anti-Government rally in London, calling on President Bio to go.

The Police say that they will investigate any utterance/incident that threatens the security of the State. 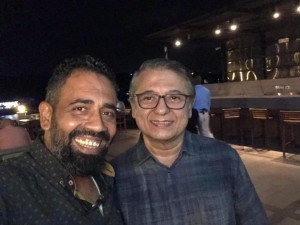