In a patriotic demonstration, the Liberals Brotherhood on Thursday 18th June, 2020, formally presented to the National Corona Virus Response Emergency Centre (NACOVERC) a One Hundred Million Leones (Le 100,000,000) aid package, meant for the fight against the COVID -19 pandemic in the country.

The package includes the sum of Thirty-Five Million Leones (Le 35,000,000), which was deposited into the NACOVERC Account at the Guaranty Trust Bank.

These items were procured by the Brotherhood for distribution to the Fourah Bay College and Yams Farm treatment centres and the Burial Team.

Before presenting the items, Head of the 22nd Anniversary Media Committee, Abubakarr Turay, said this intervention shows their commitment to helping the Government of Sierra Leone’s efforts to combat the COVID-19 pandemic.

Alhaji Abu Komeh, National Coordinator of the Liberals Elders Council, said the donation is part of the activities to mark the 22nd Anniversary of the Brotherhood, under the theme: ‘Celebrating Our Fallen Heroes and Praying for All Nations.”

“At a time like this, when the world is plagued with the COVID-19 pandemic, we recognize that this is not time for pleasure, but a time for serious action to face the pressure our beloved country is dealing with,” he said.

Mr Komeh said, on the occasion of the Anniversary, they are taking the bold step to “ask not what our country can do for us, but what we can do for our country. Consequently, we are using this period to respond to the call of the President Rtd. Brg Julius Maada Bio and the people of Sierra Leone to support the fight against COVID-19.”

Spokesperson of NACOVERC, Solomon Jamiru Esq was full of praises for the Liberals Brotherhood and their gesture, adding that the donation was timely and will help significantly in the fight against the pandemic.

“We believe Liberals stand in solidarity with us and may this gesture from the Liberals Brotherhood be a shining example to all others,” Jamiru said. He further advised Sierra Leoneans to continue to abide by the health and safety regulations of the Government.

The Quarantine Pillar Lead at NACOVERC, Major Koroma, expressed thanks and appreciation to the Liberals Brotherhood for their support to the fight against the pandemic. “This donation will go a long away in addressing some of the challenges we face in quarantine homes, especially those related to food,” he said.

The Liberals Brotherhood also presented rice, other assorted food items and One million Leones (Le 1,000,000) cash to the Burial Team.  Head of the Team, Sinneh Kamara, said he was very pleased because Liberals Brotherhood was the only group who had so far recognized their work as one of the key front-line workers in the COVID -19 fight.

After the brief ceremony at the NACOVERC Office at the SLFA Academy, King Tom, in Freetown, the Liberals Brotherhood then distributed the medical items, food and non-food materials to the Fourah Bay College and Yams Farm Treatment Centres.

The Liberals Brotherhood was formed on June 8, 1998 at Fourah Bay College (FBC), with the aim of maximizing the welfare of students and providing leadership training to upcoming leaders.

This potent fraternity, which constitutes a global membership, has produced intellectuals who have served in diverse positions including the public and private sectors in and outside of the country. Many believe that Liberals is one of the ‘blue ribbons’ to have emerged from FBC, and this is visible in the top role played by its members within the governance space of Sierra Leone. 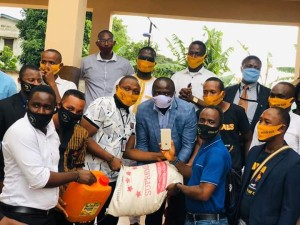