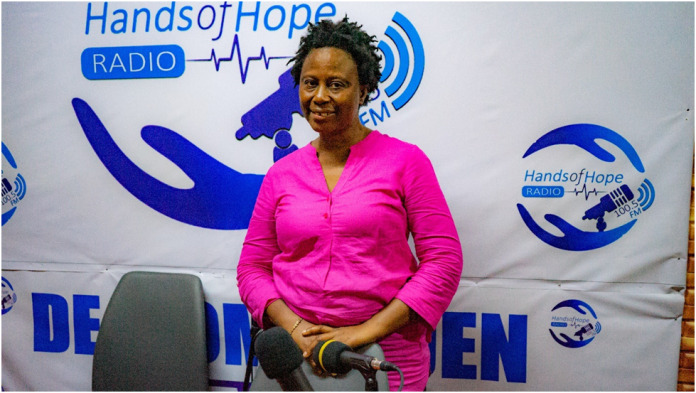 As the Hands of Hope Radio Station, operating on 100.5 Frequency Modulation (100.5FM), starts broadcasting at 28 Battery Street in Kingtom, Freetown owned by a female journalist, Mariama Khai Fornaha, a broadcast journalist with over fifteen years’ experience in Radio Journalism, a gender activist, radio producer, radio presenter, radio mentor and reporter, hers has become the first female journalist radio station in the history of Sierra Leone.

Mariama Khai Fornah, for several years worked with BBC World Service Trust now the BBC Media Action as a Local Trainer and travelled to different radio stations in the South-East of Sierra Leone providing training on Basic Journalism and she was chosen amongst several journalists by BBC WST to cover the trials of former President of Liberia, Charles Taylor, in The Hague.

In 2008, she became the first African female journalist to report on the Charles Taylor’s Trail in The Hague and her reports were broadcast through several radio stations including United Nations (UN) Radio, Cotton Tree News, 98.1, Eastern Radio Kenema and News Tabular across Africa.

Upon her return to Sierra Leone, she worked as Assistant Producer for BBC Media Action weekly radio show on the Charles Taylor’s project called ‘HAGUE LINK’’ a programme that was meant to regularly give updates of the trials.

She is an award winning journalist for the 2011 Independent Media Commission (IMC) Best Female Reporter in Sierra Leone and 2016 Student Award as Best Departmental Student -Adult Education (The Evangelical College Theology) and Best Radio Presenter from Student Union of the Eastern Polytechnic in Kenema.

Speaking to this medium, the Chief Executive Officer of Hands of Hope Radio, Mariama Khai Fornah, said that the Radio Station operates on 100.5 Frequency Modulation (100.5FM) as a licensed commercial broadcasting radio station in the country, secured its license to operate in April 2021 and they have been broadcasting limited programs due to the covid-19 challenges.

She maintained that the radio’s vision is to inspire hope and enhance resilience in communities across Sierra Leone and beyond the radio also deals with issues around livelihood, gender, the environment, governance, legal, civics, culture & arts, and educational issues among others in a balanced way to achieve its vision.

Mariama Khai Fornah, however, added that as the name implies, the radio is established to serve as an element of hope to Sierra Leoneans and this can only be achieved through concerted efforts, support and contributions from every Sierra Leonean.

She revealed that the radio station has various outstanding programs which are outlined to inform, educate and entertain the general public on issues dealing with Morality, Governance, Corporate Services, Youth Affairs, Women Empowerment, Child affairs, Climate Change, and a whole lot of packages that will be of help to their wide range of listeners.

The CEO craved all to be part and parcel to promote and support the radio to achieve its vision and mission. She further urged all to support the radio through News Coverages, Advertisements (in he forms of Jingles and Public Notices) promotions, Obituaries, radio discussions and possible partnership for airing.

She said that all those who want to work with the radio should contact them at 28 Battery Street on Kingtom, in Freetown or call on the following numbers: 076570029/099150504 or via email handsofhopesalone@gmail.com/fkhaima@gmail.com.