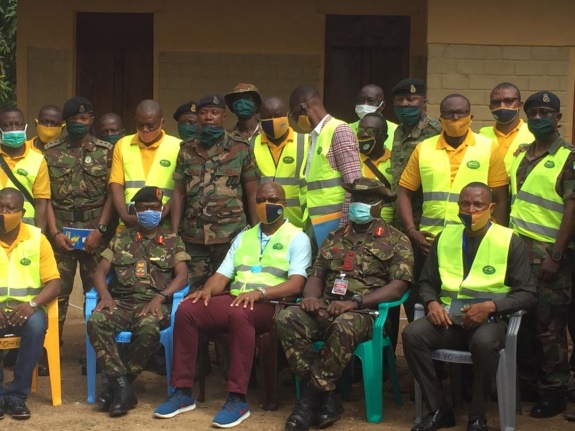 Speaking at the occasion, the Director General  commended the leadership of the  Republic of Sierra Leone Armed Forces ( RSLAF) for paving a smooth sensitization platform between NASSIT and the RSLAF.

He intimated  that NASSIT was established  by an Act of Parliament known as the Act No. 5 of July 2001 with the responsibility to  administer Sierra Leone’s National Pension Scheme.

He described the scheme as being compulsory for public and private sector establishments but voluntary for the Self Employed.

The Director General informed the gathering that the Zimmi programme was part of an ongoing nationwide sensitisation engagement with the RSLAF.

This engagement, according to the Director General,  was launched by the Minister of Defence on the 21st July 2020 at the Ministry of Defence headquarters in Freetown. “Since then”, Mr. Daboh stated  “NASSIT Staff in collaboration with the military have been traversing the length and breadth of the country in similar engagements ».

Like the other sessions, the Director General hinted that the presentation would constitute topics such as the NASSIT Scheme, Benefits and qualifying conditions, Causes of delay in accessing those Benefits,

Challenges with the Military and their solutions and a question and answer session.

He informed his audience that the topics were carefully tailored to meet the needs of the military. “It is my expectation that by the end of this engagement, your personnel will be well informed about our processes and will take the right steps to address their challanges”, he said.

In conclusion, the Director General encouraged the personnel to take full advantage of the sessions to have a  clear understanding about the scheme. He said NASSIT is desirous of making prompt and accurate payment of benefits but that is contingent upon the correctness of the membership data. He called on the leadership to encourage their personnel to update their records and make NASSIT a worthy partner.

As he worked through the challenges faced by the RSLAF,  ranging from inconsistent names, wrong dates of birth, lack of regular  update, double military numbers to double Social Security numbers, he acknowledged that most of the challenges they were facing as internal.

He  urged them to take the engagement seriously and ask relevant questions as that was the right opportunity for  them to have a thorough understanding of the scheme processes, and the way forward in addressing their numerous challenges.

He assured the Director General of  the commitment of the RLSAF to maintain a good working relationship with the NASSIT and called on his personnel to update their records regularly, request for their Statements of Accounts and always enquire about their status to NASSIT.

The presentations which were done on thematic areas of the scheme ended with a question and answer session.

The engagement was concluded with distribution of NASSIT customised face masks to personnel of the Bravo Company in the 14th Battalion of the Republic of Sierra Leone Armed Forces.