The indefatigable Director General of the National Telecommunications Commission (NATCOM), Daniel Bobson Kaitibi, during an exclusive interview at his Hill Station Office, outlined the achievements the institution has made within six months record time.

He started off by stating that all the outstanding achievements made, through him and his Deputy, Amara Brewah,  during the period under review would not have been made possible without the support and cooperation of the Ministry of Information and Communications, Board of Commissioners and other  colleague members of staff.

“The achievements we have recorded during this short and challenging period would certainly not have been made possible without them,” he expressed gratitude.

He stated that the 26th September 2020 marked  six months since  both of them were appointed to serve as Director-General and Deputy Director-General of the National Telecommunications Commission.

Kaitibie furthered that on assumption of office on the 26th March 2020, the following were the priority areas they initially focused on: to partner with the Ministry of Information & Board to ensure the containment of COVID-19 nation-wide and at NATCOM.

He also mentioned the enactment of the Electronic Communications Act which would eventually see the transformation of NATCOM into an Authority.

To conduct a Cost study to set tariffs for interconnection and other telecommunications services, procure Cyber Security and Fraud prevention Equipment, install Fixed Spectrum monitoring equipment and handheld tools and secure funding for the completion of the NATCOM Building up at South Ridge.

The young and result-oriented Director General said, in collaboration with the Ministry of Information and Communications, considerable efforts have been made in respect of the first two and sixth priorities, and so therefore, on behalf of Management and Staff of the Commission, he wishes to say many thanks to the Ministry and the Board for providing the leadership required in recording these feats.

He said he is delighted to announce that the International Telecommunications Union (ITU) is currently exploring options for supporting the establishment of a cost methodology and models for interconnection and telecommunication services for Sierra Leone and to work with NATCOM in securing the necessary funding for that to happen. According to him such can only be great news for NATCOM.

The DG said Cyber Security and Fraud Management remain a core aspect of their key priorities as a Commission and he is confident to report that they have made provision for the procurement of that equipment in the just-concluded FY2021 Budget.

“Whilst it may not be enough, we would continue to partner with our international partners to secure funding in this regard,” he maintained.

He revealed that his Deputy and himself have made a deliberate decision to ensure the welfare of employees is treated with utmost priority saying nothing will change that.

The pragmatic DG said they have engaged all the Directors in the different Directorates and made it clear how important it is to work as a team and be inclusive.

“This does not subtract from the fact that there may be differences in opinion and not be fearful of the obvious consequence: that there are bound to be differences of emphasis and approach on a variety of matters. What is crucial, however, is that we have forged an enduring unity across the Commission, which brings us together as the overriding commitment to a joint effort in the growth of the Commission and improves our well-being,” he intimated in a relaxed mode during the interview.

He said in six months of their leadership, a few remarkable achievements were also recorded, and at the end of the day, the yardstick that they shall all be judged by is one and one only: and that is, are they, through their endeavors at NATCOM, creating the basis to better the lives of their consumers.

He said they do not claim to have all the answers and are confident that this balanced approach, based on stakeholder engagements and drawing on the positive experiences of other Regulators, NATCOM can help resolve those issues in a manner that benefits the country as a whole saying they are on course.

Kaitibie said additionally he has engaged the Director responsible for Corporate & Industry Affairs to make adequate plans to ensure they have a robust consumer perception survey in the first quarter of next year on the quality of service delivered by Mobile Network Operators, collect information on the understanding of the functions of the Commission and its benefits to end-users, create awareness of the Commission’s roles in the socio-economic development of the country, strengthen the capacity and capability of regional staff members for the enforcement of the regulatory mandate of the Commission, etc.

He highlighted that as they await the final budget for FY2021, he knows there are exciting times ahead and NATCOM provides a unique space to work in but he would also urge all to tread cautiously in ensuring they meet their financial obligations as a responsible Commission.

“The DDG and I would continue to rely on our Directors to provide the requisite leadership to employees and report to us accordingly,” he assured.

He said once again, he and the DDG would use the opportunity of their half-year anniversary to extend thanks and appreciation to their fantastic employees who have been supportive of the key priorities they set out since their respective appointments.

The NATCOM Director General concluded by stating that as President Bio correctly stated in his acceptance speech of the COI’s White Paper Report, when one is appointed to serve, “one must do so with honesty, fairness, justice, diligence, and compassion”.

He noted that it is on that principle that they would continue to serve to ensure a commitment to shared values. 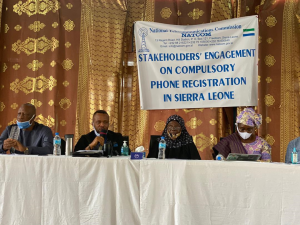 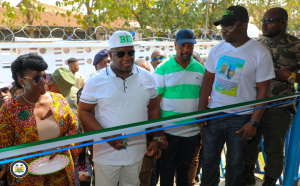