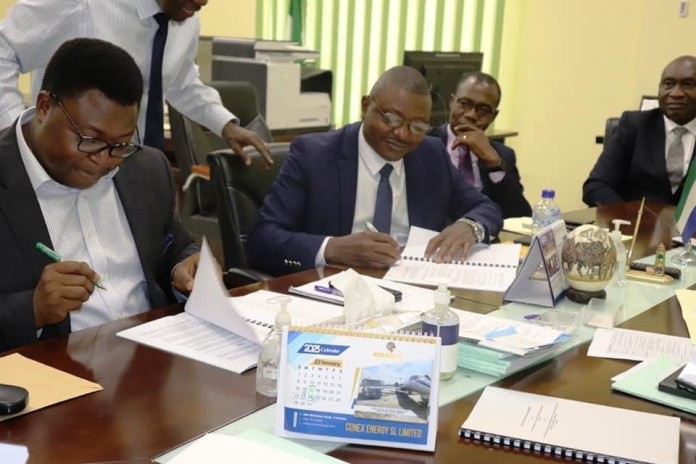 The lease agreement signed on Tuesday 17th January 2023 between the Government of Sierra Leone and ARISE Integrated Industrial Platforms Ltd for the development, expansion and management of the Pepel Tonkolili Railway work, Pepel Port, Railway connectivity to Marampa mines, the introduction of passenger rail services and the rail connection to Guinea, successfully went through Cabinet scrutiny before it was signed and now awaits Parliamentary debate and approval.

It was observed that people from various walks of life in the country were full of praise for what they termed as a strategic development after the signing of a lease agreement especially when it was realized that the entry of the entity will ensure the provision of job opportunities, revenue for the Government and above all minimize the constraints in the movement of people and goods.

Some even went to the extent of profusely commending the Minister of Mines and Mineral Resources, Timothy Kabba, whom is quoted of expressing the conviction that the agreement is part of the bigger reforms in the mining sector as the current political administration is passionate about and bent on broadening the space to have more players participate in the development of the country.

In an exclusive interview with the result oriented Minister of Mines and Mineral Resources, he confidently intimated that ARISE IIP is a credible company with a reputation for developing and managing infrastructure in Africa.

“This agreement is taking a Government asset from monopoly to be more accessible,” he added.

Minister Kabba furthered that the revival of the mining operation requires significant investment in infrastructure for the country to fully benefit from the growth of its mining output.

According to the lease agreement, the Government of Sierra Leone will get a 10% free Carry and provide access to rail and port facilities to other bulk mineral producers in the northern corridor.

Of significance also is that the project will expand economic activities by providing jobs for Sierra Leoneans and enable passengers’ locomotion from Tonkolili through Bombali to the Port Loko district.

Another major component of the agreement has to do with the introduction of passenger rail services which will allow communities for better mobility and trade, increase mineral export with an additional 20 million MT, 10% dividend to Government, surface rent to landowners, annual royalties PAYE and other taxes.

On his part, the newly appointed Minister of Finance, Sheku Ahmed Fantamadi Bangura, maintained that ARISE IIP is a sector specialist firm with a proven record across Africa in managing infrastructure. He revealed that the signing of the agreement came after several consultations, due diligence and approval from the Cabinet with concurrence from the Ministry of Finance.

He maintained how the agreement is in the best interest of the Government and People of Sierra Leone adding that after the signing the agreement will be taken to Parliament for ratification.

Worthy of note is that the business plan, financial model and pre-feasibility studies are estimating a total investment of 476 million dollars covering the refurbishment of the Pepel Tonkolili Railway work, Pepel Port, Railway connectivity to Marampa mines, the introduction of passenger rail services and the rail connection to Guinea.

Jesper Harring Boll , the Managing Director of ARISE IIP stated that ARISE is a conceiver, developer and operator of high-added-value infrastructure committed to making Africa thrive with an investment of several billion dollars and a good track record across many countries in Africa like Benin, Togo, Gabon, Cote d’Ivoire, Tchad, RoC, DRC or +

Mohamed Barrie, a qualified infrastructure developer underscored that   the signing of the agreement was a step in the right direction maintaining that such will mark the end of the monopoly in the management of the port and rail in the country and above all allow another player to come onboard and operate with greater benefits emanating that will enhance national development.

It is not business as usual: the Government were serious, conducting extensive economic calculations and making plans for how the takeover would work. The Government’s goal was not to continue with business as usual, but to turn a new page, and present a better deal to the people of Sierra Leone.

Members of Parliament are expected to give their blessing to the agreement simply because the merits that will accrue to the nation are enormous including the introduction of passenger rail services that will make room for residents in communities to move at ease and with larger goods and more importantly increase mineral export with an additional 20 million MT, a 10 per cent dividend to the Government, surface rent to landowners, annual royalties PAYE and other taxes.