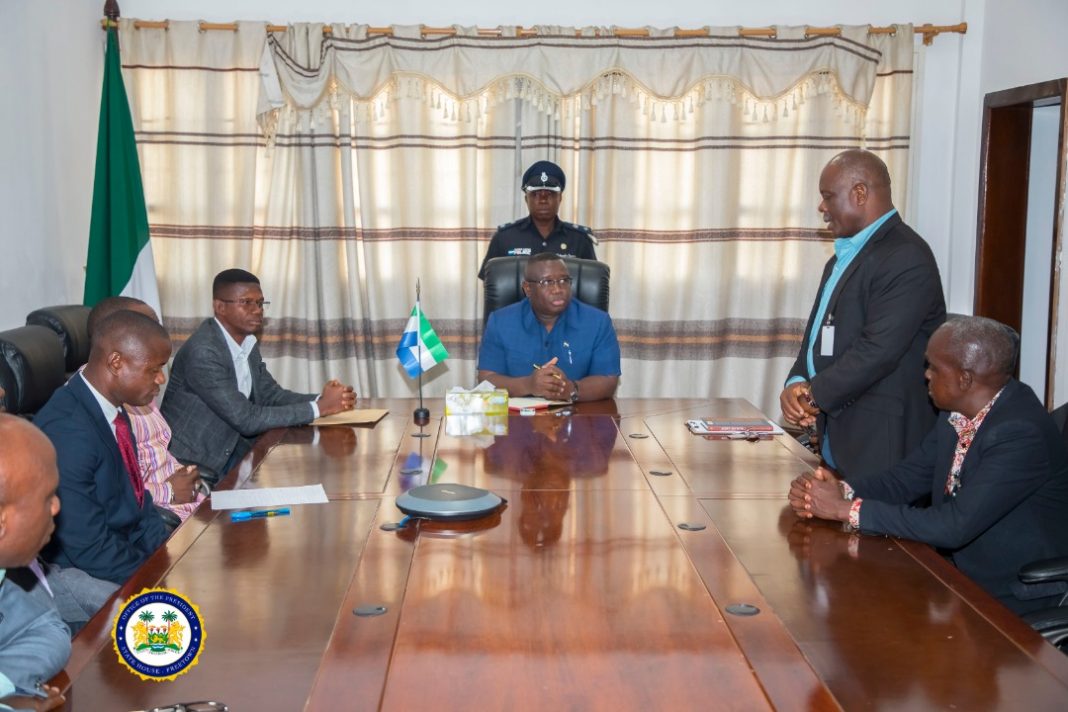 Members of the newly-constituted Sierra Leone Premier League Board and the Sierra Leone Football Association on Thursday 21st November, 2019 engaged President Julius Maada Bio at State House on preparations for the 2019/2020 league season.

Presenting the visiting team at State House, Minister of Sports, Ibrahim Nyelenkeh, said the meeting is important because it gives an opportunity for the President and members of the newly-constituted Board to interact. He noted that as a moral guarantor, it was his responsibility to ensure that football was up and running in the country and commended the President for his support for the development of sports.

Vice President of the Sierra Leone Football Association, Brima Manzola Kamara, said it is a normal procedure to select a Board at the start of a season that would be in charge of the running of the league. He also used the opportunity to thank the President for the financial support from the government during the last premier league and assured that they would do their best to make sure that football reaches its highest level in the country.

Chairman of the new Board, Allieu Vandi Koroma Esq. said he is grateful for the opportunity to meet the President, saying that was demonstrative of the President’s commitment to the development of football in the country. He said they were aware of the enormity of the task ahead of them, but assured him of their readiness knowing full well how important football is to the country and the New Direction.

“We are pleased with the budget that was read out by the Finance Minister in Parliament, especially the promise to support the activities of the premier league. With your dispensation of delivering on your promises, we are very hopeful that this will come to pass. We want to tap into your passion and deliver to the people of Sierra Leone,’’ he said.

In his response, President Bio said that it is the responsibility of the government to support whatever that would bring happiness and joy to its citizens. He said Sierra Leone is a football-loving nation and therefore the government would continue to support the growth of the sport.

He expressed hope that the new leadership at the Board would provide the governance needed for another very good premier league season this year. He also used the occasion to call for sanity within the football administration, adding that Sierra Leoneans should develop the spirit of sportsmanship and see football as a game of discipline.

“I hope you will provide the leadership people are looking for, because football has an impact on the mood of people. I congratulate the Board and wish you the best as we are looking forward to a successful premier league season,” he said.