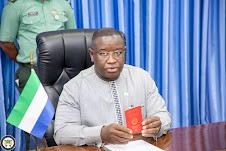 The new national passport is an upgraded electronic version of the previous one with special security features to avert potential forgery and cloning of the country’s passport.

Minister of Internal Affairs, David Panda-Noah, told the President, “I feel elated to be here as part of the continuation of the process leading to the provision of affordable securitized passports for the citizens of Sierra Leone. This passport merit International Civil Aviation Organization (ICAO) recognition”.

He added that as part of the President’s directives to transform the immigration system, they had engaged the E-passport contractor to upgrade the existing passport to include special securitized features.

“I am proud to inform you that the new national passport meets all ICAO and other international standards. The chip embedded in the passport makes it electronically readable and could be used at any E-gate,” he noted.

While conferring the citizenships status, President Julius Maada Bio congratulated them as they subscribed to the oath of allegiance and described the event as one that had been the climax of a historic journey after months and years of searching for their ancestral roots.

“As a people, we have always opened our hands and offered smiles to our brothers and sisters making this momentous journey back home, whether from the forced migration of slavery or a voluntary movement that we collectively call the Africa Diaspora.

“Sadly, the history of slavery has always been etched on our minds because our brothers and sisters were captured and sold from the early 16th century to the late 18th century. Our country was at the heart of that history too. In 1675, Bunce Island Slave Fortress, a major enslavement and exportation hub in the Sierra Leone Rivers, was used for the transportation of enslaved Africans in their thousands. In 1787, the colony of Freetown was declared a settlement for freed slaves. Hence, the first set of free men and women, referred to as the black poor, were sent to Freetown,” the President informed.

The President stated that he believes the future of Sierra Leone could not be defined by the agonizing history of slavery, adding that that was why his Government was implementing the most audacious human capital development programme that could support over two million children with free quality education nationwide.

“We have abolished the 55-year-old criminal libel law and now guaranteed journalists the freedom to hold the Government accountable. We abolished the death penalty and enacted the historic Gender Equality and Empowerment Act, among others.

“This is the new Sierra Leone. We want to build a progressive, educated, and investor-friendly nation, but as we continue this new journey, we also know that our nation’s sustained development needs the genuine collaboration of her Diasporians. Therefore, over the years, we have been heartened by the homecoming of hundreds from the Sierra Leonean African Diaspora. Some have not just subscribed to the oath, collected passports, and returned, but they are already making a difference in many communities”.

He closed by encouraging them to be good ambassadors in rebranding and promoting Sierra Leone, urging them to optimize the Sierra Leone diaspora resources for the benefit of the nation by exploring trade and investment opportunities, bringing their experience and knowledge to bear on the development trajectory of the country and make Sierra Leone a sustainable travel destination for the African Diaspora.