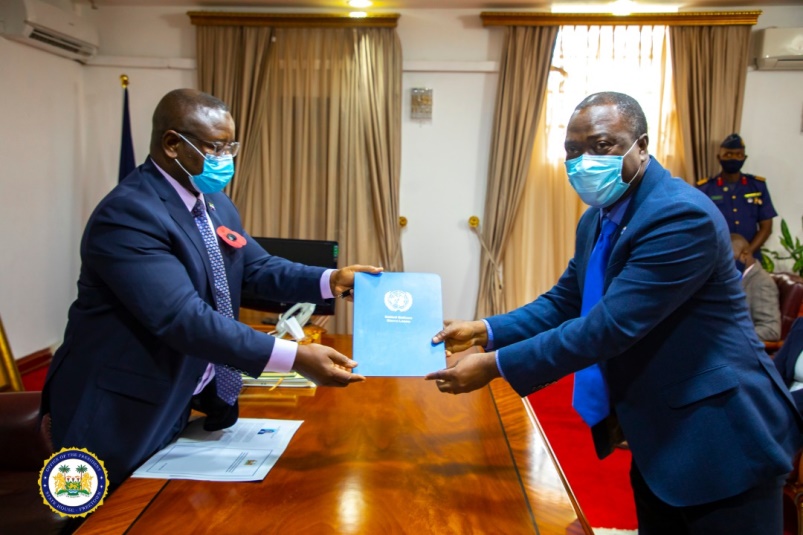 On the 22 October, 2020 the new United Nations Resident Coordinator to Sierra Leone, Babatunde Ahonsi, called on President Dr Julius Maada Bio to present his letter of appointment by the UN Secretary General.

”It is with utmost humility and great honour that I present my credentials as the United Nations Resident Coordinator appointed by His Excellency, the United Nations Secretary-General, Mr. Antonio Guterres, to serve in Sierra Leone. I am privileged that your Excellency speedily approved my designation and wish to express my sincere appreciation and profound gratitude.

“I am cognizant of the fruitful relations that exist between the Government of Sierra Leone and the UN system. Thus, I am eager to deepen UN partnerships with the Government and our other partners in development towards accelerating the country’s quest for the attainment of the Sustainable Development Goals and a middle-income country status,” he said.

Mr Ahonsi noted that 2020 had been a challenging year worldwide, especially for Sierra Leone, after having gone through Ebola between 2014 and 2016 to be affected again by the COVID-19 pandemic. He added that despite those health challenges and their adverse development impacts, the admirable resilience of the people of Sierra Leone had kept the country going.

”Your Excellency, this is a time for a change. We can defeat COVID-19 by being responsible citizens and heeding the call of our health experts. Sierra Leone needs all of us to overcome this outbreak. While we are still battling this virus, the UN system in Sierra Leone remains committed to supporting your Government not only with the health response but also with recovery,” he explained.

In his remarks, President Bio welcomed the new UN chief and congratulated him on his appointment, noting that he had taken office at a very difficult time the world over. He agreed with him that the novel Coronavirus was really ravaging the lives of people and the economies of the world.

“Sierra Leone and the United Nations system enjoy a very strong, multilateral and beneficial relationship. I think we are contributing to the UN success around the world. You are going to build on that very good relationship that my country has with the UN,” he said.

The President reiterated that the UN had supported Sierra Leone in achieving its sustainable development goals that would foster developments.

“The country had identified Peace and National Cohesion as a means that would provide the ecosystem for sustainable economic development. We are putting our own architecture together that pays specific attention, at all times, to instigators of violence and unrest. We believe that those fundamental grievances that are left unaddressed can lead to challenges and political upheaval. We want to make sure that they are addressed within a framework,” he noted.