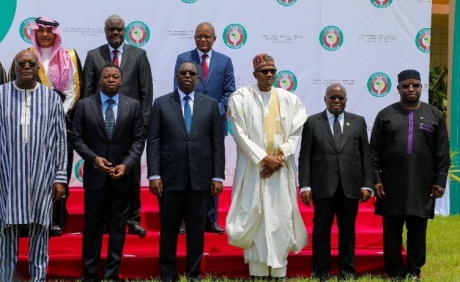 President Dr. Julius Maada Bio on Saturday 14th September 2019 called on Presidents and Heads of State in the Economic Community of West African States (ECOWAS) to optimize their efforts in the fight against terrorism.

“First, I urge colleagues to support the ECOWAS Standby Force, a brigade-sized unit, as a coherent regional force that augments and complements the capacity of existing military forces in fighting and containing the spread of terrorism,” he said, adding that that force might also help in harmonizing operational philosophies and procedures among the region’s armed forces.

He called on his colleagues in the 15-member regional political and economic union to speedily deploy equipment and pursue other capacity-building arrangements to bolster military forces in the region.

“I, therefore, urge Your Excellences and the ECOWAS Commission to speedily operationalize and closely monitor the implementation of Phases 2 and 3 of the ECOWAS Standby Force Logistics Depot, which Sierra Leone is hosting at Lungi. Delaying the operationalization of the logistics depot is a dangerous calculation,” he warned.

President Bio also reminded the Extraordinary Summit of ECOWAS Heads of State and Government on Terrorism to view the sub-region as their neighborhood and must, therefore, ensure that that neighborhood is free of strife and the danger of terrorism.

“We must therefore quickly operationalize a coherent plan for collecting, processing, sharing timely and actionable intelligence on terrorist activities and movements across the entire region. We must, therefore, invest resources into a comprehensive and effective strategy to achieve this.

“Thirdly, I urge the ECOWAS Commission to closely examine legal, policy and institutional frameworks across the region that addresses the threat of terrorism. The region must tackle extremist violence, terrorism, transnational crime in an organized and harmonized manner,” he said.

He finally called on the summit to impress on civil society stakeholders that national development and resilience depend on security, adding that they must, therefore map out clear and coherent ways in which civil society actors could help Governments communicate with populations, build trust, defuse the triggers of conflict, support equitable and accountable governance that would create opportunity and support peace building.