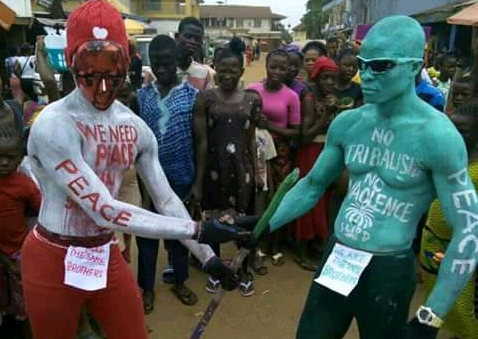 In the wake of an outburst of violence within the Central Business District of Freetown  by irate youths leading to the creation of panic, snatching away of personal effects, damaging vehicles and wounding, there had been accusations and counter-accusations some saying it was politically motivated. The two oldest political parties in the country, the Sierra Leone Peoples Party (SLPP) and All People’s Congress (APC) Party are pointing accusing fingers at both. The governing SLPP, however, claimed that their supporters came under attack by certain APC operatives and some of his members were victims of a violent attack.

SLPP and APC are trading threats to the peace while at daggers drawn; the peace edifice is being fractured by party sycophancy; economic hardship is beating the citizens left, right and center but our Bar Association is only being a silent spectator in all these. History has it that once
civilization and western education from Sierra Leone illuminated other regions of British West Africa. But now we’re receiving tutorial from countries that were once students of Sierra Leone.
It is such silence that fertilizes the arrogance and intoxicates the egos of our leaders. Sadly, our Bar Association is only being a dutiful cupbearer of the poison of silence”, Lawyer Sorie Sengbe Marrah maintained.

In stating its position on the ugly occurrence, the National Secretary General of the party, Umaru Napoleon Koroma, on behalf of the SLPP on 26 January 2020 has this to say:

“The Secretariat of the Sierra Leone People’s Party is perturbed by the unsuspecting attack on its members in their party headquarters by identifiable members of the main opposition All Peoples Congress on Sunday January 26 2020. The attack which was unprovoked led to the serious injuries inflicted on about 27 members of our party.

This very well planned and orchestrated foray came in the aftermath of a threat message put out by the leadership of the APC after a scuffle that ensued during the funeral ceremony of one of our members by the name of YD Sesay earlier this month.

The general public would recall that after their devastating defeat in the 2018 general elections, the main opposition APC through its vanquished flagbearer Dr. Samura Kamara, vowed to create all sorts of problems for the incoming administration. The APC even vowed to make the country ungovernable in the aftermath of their defeat in the 2018 election.

Furthermore, the APC has always looked for avenues to generate chaos and mayhem with the intention of scaring investors from the country.

The SLPP has bent backwards over to accommodate the excesses of the APC which are now becoming unacceptable and intolerable. The smear campaign on our presidential candidate and now President Julius Maada Bio, and  the unknown variables in the matrix of national development, have left them bemused.

The SLPP is assuring all of its members and the peace loving Sierra Leoneans that measures would be put in place to protect them at all times.

As a law abiding party, we would want to assure all, of our vigilance in keeping with the terms of reference of previous Commissions.

We want to appeal to all to stay calm and go about their business.

On its part the National Secretary General of the All People Congress Party Amb. Dr. Alhaji Osman Foday Yansaneh on the 27 January 2020 refuted the SLPP Statement on the violence furthering that it was orchestrated by SLPP supporters.

This was what he told the world:

“The All Peoples Congress (APC) is alarmed at the impunity with which wanton destruction of properties, arson and grievous bodily harm to citizens was perpetrated by known members of the governing Sierra Leone People’s Party (SLPP) who laid siege to the entire Freetown Business District for several hours on Sunday 26th January 2020. During the siege, several of the SLPP’s well-known thugs including those going by nicknames ‘Ratty’, ‘Abravo’, ‘SLA’, etc. etc. were seen; as a fight which originated from right within the SLPP headquarters amongst SLPP thugs, spilled out into the streets of Freetown.

The SLPP thugs, who were engaged in open warfare against each other, were heard trading insults over preferred candidates that the various SLPP factions supported in their upcoming internal elections for national officers positions like SLPP National Chairman and SLPP National Secretary General. Stone-throwing matches between and amongst themselves eventually culminated in arson and destruction on a level that reminded innocent citizens of the January 6th Invasion of Freetown.

An audio clip being shared by SLPP members of events of yesterday has some thugs like ‘Ratty’ reminding His Excellency President Dr. Julius Maada Bio and SLPP Government of unfulfilled promises to SLPP youths being amongst reasons for high frustration amongst SLPP youths.

Against the above background, the APC is calling on the Sierra Leone Police (SLP) to make an immediate statement on yesterday’s exhibition of lawlessness on the streets of Freetown as this is a growing menace now within the Freetown Municipality. Few weeks ago, innocent Sierra Leoneans along Syke Street by GLOBE CINEMA HALL were attacked when SLPP thugs under the aegis of Hon. Lahai Lawrence Leema, Deputy Minister of Internal Affairs and SLPP Spokesman, spilled on to Syke Street after earlier launching unprovoked attacks on the APC Headquarters and houses along Hannah Benka-Coker Street and Old Railway Line, Brookfields. Many women and children along Syke Street were terrorised and the scenes of terror caught on video clips that have since gone viral.

APC also in no uncertain terms, wishes to debunk an SLPP Press Release issued today Monday January 27th 2020 but with yesterday’s date and in which SLPP, falsely and most despicably, accuses APC members of having attacked SLPP offices in Freetown. SLPP also falsely accuses APC members of wounding 27 of SLPP members right inside their SLPP party office.

The APC views these unfounded accusations as distractions from the real issues around SLPP’s display of lawlessness on the streets of Freetown yesterday; which was a sacred Sunday.

Instead of issuing a sincere apology to residents of Freetown for their egregious breach of the peace, the SLPP is making matters worse by insulting the intelligence of Sierra Leoneans with outlandish and ludicrous claims. How is it possible for APC members, who have no business within SLPP offices, to actually enter inside there, overpower the dozens of SLPP members who reside in there, leave 27 SLPP members wounded and yet no video or picture exists of APC members shown anywhere inside or around the SLPP headquarters? In this day and age of social media and multimedia smartphones, it is a sheer impossibility that nobody recorded even a single photo of the alleged APC Members in or around the SLPP offices.

All information at our disposal is that yesterday’s violent incident at SLPP party offices which spilled out from their offices and became a street warfare, was solely an intra-SLPP matter amongst various factions of SLPP thugs.

The press release by SLPP alleging an attack on their office by APC members is therefore nothing but an attempt to nefariously bring the name of the APC into disrepute. The APC therefore wishes to inform its membership and the general public of the following:

The SLPP further alleges in their impugned press release that the leadership of APC had put out a ‘threat message’ following that unprovoked attack of the SLPP on the APC offices earlier this month. NO SUCH ‘THREAT MESSAGE’ WAS EVER ISSUED AND THE CLAIM IS COMPLETELY UNTRUE. The APC views this accusation with utmost distaste.

The facts are that the leadership of APC has always used all opportunity to pacify our supporters to remain calm and law-abiding even when provoked and consistently emphasizes the need for peace, stability and national cohesion as the bedrock for sustainable development.

The APC believes that the issue of growing lawlessness and violence in all regions of Sierra Leone, should not be politicised and therefore calls on relevant authorities as well as the International Community and Civil Society to do all that is required to ensure those responsible for such continued lawlessness and violence, are made to face justice.”