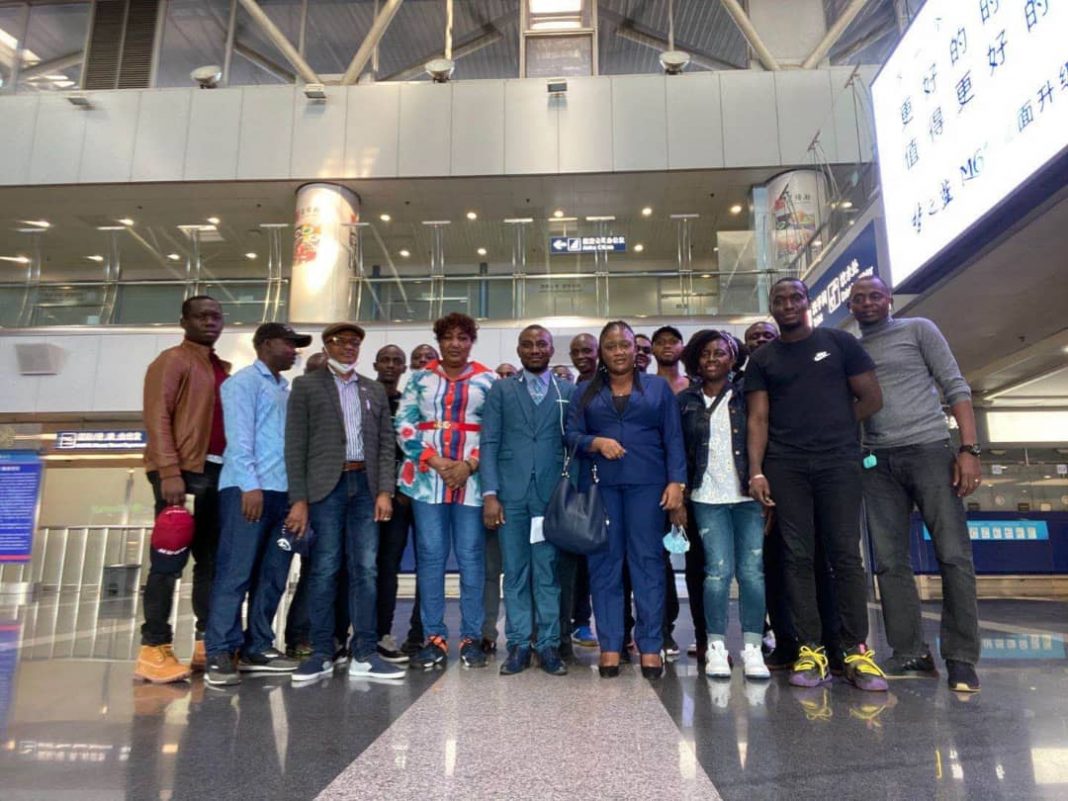 Speaking to one of the graduates at the Beijing Xinqiao International Airport, Kabineh Kabba, he emphatically registered his hearty gratification, on behalf of his colleague graduates, to their dynamic and competent Student Union President, Jonathan Koroma, for his prompt intervention in salvaging their worries towards the $80 payment for COVID-19 NUCLEIC TEST.

Though he was five days new in office, President Jonathan Koroma diplomatically related their lamentation to the Embassy of the Republic of Sierra Leone in Beijing under the dynamic leadership of H.E Ambassador Ernest Mbaimba Ndomahina, Sierra Leone’s Ambassador to the Peoples’ Republic of China. He added that their decision to overwhelmingly vote for President Jonathan Koroma and his proactive team was one of the most important decision they made in contemporary times. According to them, Jonathan Koroma is a true born leader, he ends.

Speaking on behalf of her boss and the Embassy, Ms Rachael Kanu, he Acting Head of Chancery at the Republic of Sierra Leone Embassy in Beijing presented a financial aid as a form of lunch for all the graduates to the President, on behalf of her institution.

She extended heartfelt salutation from H.E Ambassador Ernest Mbaimba Ndomahina to the students. She told them that had it not been that they are in the era of COVID-19 they should have prepared a send- off party for the charming graduates. The young and caring Acting Head of Chancery admonished the iconic graduates to go and contribute immensely towards the socio-economic development of Sierra Leone.

Responding to the Acting Head of Chancery, President Jonathan Koroma, Aka Super Hero, who is currently a third year PhD candidate, at the Department of SCI-TEC and Communication Policy, Research in the Ethics and Privacy of Cybersecurity, situated in the University of Science and Technology of China, Hefei, Anhui Province P.R. China, extended appreciation and gratitude for the hind gesture by the Embassy.

Jonathan also holds a Master of Law in International Relations from Jilin University, Changchun China and a Bsc in Peace and Conflict Studies from Fourah Bay College, University of Sierra Leone.

This young and charismatic gentleman’s academic background is impressive which has put him on a better footing to attain and maintain this enviable administrative height.

Jonathan has an undisputable track record in administrative growth and trajectory which always make him stand distinct among his peers.

President Jonathan Koroma also commended the SLPP Government’s intervention in providing the $80 waiver COVID 19 NUCLEIC TEST fee for the graduates on arrival at the Lungi International Airport and also registered his profound appreciation on behalf of the graduates to the Embassy for their financial aid and unflinching support  to Sierra Leonean students in China.

The Sierra Leone Students’ Union in China (SLSUC) remains thankful to H.E. President Julius Maada Bio, for the Government’s efforts in developing the country’s human development index by addressing the needs of students both at home and abroad, he said.

President Jonathan Koroma assured graduates and continuing students that his administration will cautiously liaise with the Embassy and other line Ministries in order to maximize the welfare of students in China so that they fully attain their academic mission in China via proactive measures in combating the challenges that restrain students from acquiring excellent academic laurels.