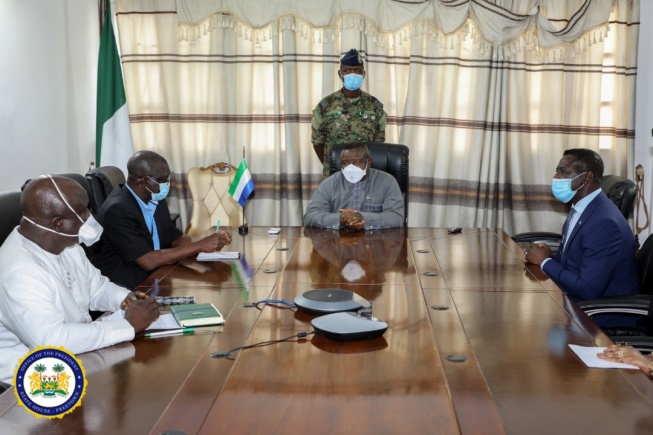 On the 16th June 2020, at State House, President Julius Maada Bio met with Resident Ministers, who double as COVID-19 Regional Coordinators and presented them with vehicles to ease their work in the fight against the Coronavirus.

Chairing the meeting, the Chief Minister, Professor David Francis, said the move is part of the President’s plans to support, strengthen and capacitate the different actors in the fight against the virus.

“This move is to acknowledge and support your work as Regional Coordinators,” he further intimated.

Brigadier (Rtd) Kellie Hassan Conteh, Interim National Coordinator, said that since their appointment the Regional Coordinators had always responded quite well and they had made lots of inputs in the fight.

He thanked the President for appointing the Resident Ministers as Regional Coordinators, noting that they wouldn’t have done much coordination if it were not for their involvement.

He also mentioned that they had disbursed funds to all the district operation centers to start their operations.

In his response, President Bio thanked the Regional Coordinators for their contributions and roles in the COVID-19 fight.

He said that there had to be local ownership of the fight against the virus, adding that such means there is the need to decentralize.

The President said that the vehicles handed to regional leaders was in recognition of the remarkable work of coordination they had done and to further enable them to do more.

Resident Minister South, Mohamed Allie, said they were happy to receive the vehicles because it would help them perform their duties effectively. He assured of their commitment to provide the required leadership at regional levels and to work with Government to get rid of the COVID-19 in the country.