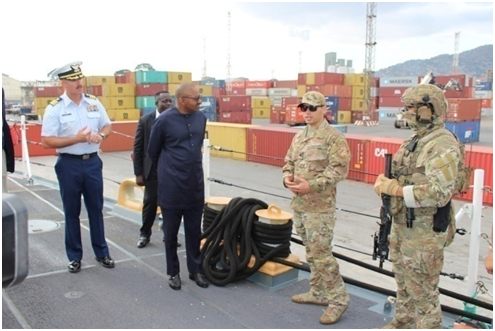 In a Press Release dated 1st August, 2022 issued by the US Embassy in Sierra Leone it was stated that the Vice President, Dr. Mohamed Juldeh Jalloh and senior military leaders joined Ambassador David Reimer in touring the U.S. Coastguard Cutter Mohawk.

It was mentioned that following the port visit, Mohawk will also embark on a joint mission with officers from Sierra Leone’s Joint Maritime Committee’s (JMC) Joint Operations Center (JOC) and Ministry of Fisheries to protect Sierra Leonean waters.

“The U.S. Embassy is proud to welcome the USCGC Mohawk to Freetown this week,” said U.S Ambassador David Reimer. “Supporting our partners in maritime security is a vital U.S. policy priority.  Cooperation on maritime security ensures not only safer and more secure oceans, but also helps safeguards Sierra Leone’s endangered marine biospheres, necessary for food security and the protection of the environment for future generations.”

“My crew and I are excited to be in Freetown,” said Cmdr. Andrew Pate, Commanding Officer of Mohawk. “One of our primary objectives during this deployment is to enhance partner nations’ capacity to operate effectively in the maritime domain and promote targeted, effective, intelligence-driven enforcement operations.”

Highlighted was that the United States and Sierra Leone have a proud history of working together to promote peace, stability, and security in Africa.

The visit of the vessel, it was underscored, is part of existing bilateral cooperation between the Governments of United States of America and Sierra Leone regarding maritime support and capacity building to effectively guard the country’s coast and maritime borders and resources. It also seeks to contribute to strengthening global maritime cooperation.

On his part, the Vice President Dr. Mohamed Juldeh Jalloh stated that he

visited the USCGC Mohawk vessel (WMEC 913), which according to him, is in Sierra Leone as part of the bilateral cooperation between the United States and Sierra Leone in the area of maritime support and capacity building.

He said enhanced capability to effectively police our coast is vital to safeguarding our maritime borders and resources while at the same time contribute to strengthening global maritime cooperation.

“I want to thank Cmdr Andrew Pate and his crew for the conducted tour and wish them a productive and enjoyable mission in Sierra Leone in the coming days,” he expressed gratitude adding how their mission is a vivid testimony of the outstanding partnership between the Government of Sierra Leone and the United States of America.

It must be noted that during the visit of the vessel, Mohawk will host ship tours for Sierra Leonean Government and military leaders as well as participate in discussions with fishing community members about the impact of illegal, unreported, and unregulated (IUU) fishing, including a film screening by award-winning Sierra Leonean documentarian Lansana Mansaray. 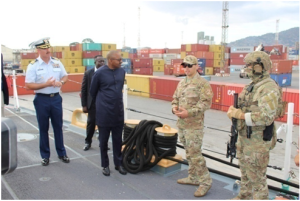 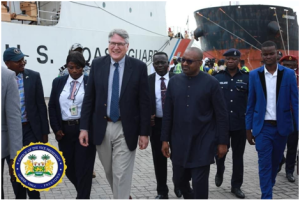