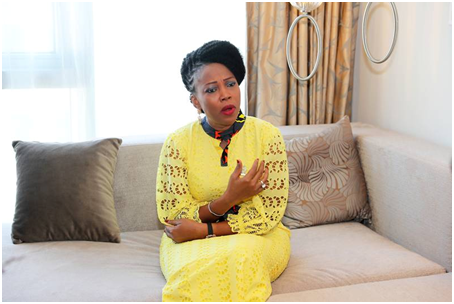 The First Lady, Dr. Fatima Maada Bio, arrived in Rome, Italy on Thursday 17th November 2022, for the inaugural commemoration of United Nations World Day for Prevention of and Healing from Child Sexual Exploitation, Abuse and Violence

It must be recalled that a special day was recently set aside as a brand new Day of commemoration by the U.N. General Assembly after a Historic Resolution was presented there by the First Lady earlier this month as part of His Excellency President of Sierra Leone Dr. Julius Maada Bio’s efforts to protect Women and Children especially Girls.

To her credit, H.E. Dr. Fatima Maada Bio has a shining record, spanning over two decades now, on Advocacy for Protection of Women and Children.

On November 18th, 2022 in Rome, the distinguished Sierra Leone global icon used her experience to participate in High-Level discussions alongside a distinguished panel of Scholars and Government Representatives.

During the High Level discussions,  consensus on the types of Actions that Governments around the World can take to Prevent Child Sexual Exploitation, Abuse and Violence were deliberated on as well as to ensure victims can get to Heal after suffering such heinous crimes.

The First Lady was warmly welcomed at the airport by a cross-section of Sierra Leone diplomats in Europe led by Sierra Leone Ambassador in Germany H.E. M’Baimba Lamin Baryoh who is also accredited to The Vatican and Italy.

More than 600 victims of child sexual abuse and violence gathered with their families at the Vatican for “healing prayers” on Friday – 18th November 2022 which the United Nations declared as World Day for the Prevention of Healing from Child Sexual Exploitation, Abuse and Violence.

Fatima Bio, who introduced the UN resolution, was in Rome to observe the day that will annually train the spotlight on the sexual exploitation of children and the need to bring those accused to justice.

“It’s also about a healing process. The resolution itself is not only about having a day but about using that day to let child rape victims know that they are not in this on their own,” Ms Bio said in an interview with The National in Dubai before leaving for Rome.

Sponsored by Sierra Leone and Nigeria, the UN resolution was co-sponsored by more than 110 nations and adopted on November 7.

It recommends education about the effects on children, the need to prevent exploitation offline and online and for survivors to have access to justice, eliminate stigma, affirm their dignity and promote their rights.

The symbolism of the Vatican to commemorate the first day was deliberate, to show that the Roman Catholic Church is committed to addressing the scale of child sexual abuse by priests.

Pope Francis has expressed shame about sexual abuse by the clergy and promised that the “ugly habit” of covering up cases would change.

“When people talk about rape, you think of girls. But the story is darker in the church, because they were supposed to protect children,” Ms Bio said.

Prayer was a key part of the first commemorative day.

Ms Bio also credited the resolution to Jennifer Wortham, a US resident whose two younger brothers were molested by their parish priest more than 30 years ago.

Ms Wortham appealed to her to raise the issue at the UN, was with her when the resolution was first presented in September and was also in Rome for the prayers.

A key aspect of the campaign is access to justice so survivors and their families can rely on support when they take their battle to court.

“Victims have to find money to pay for their court cases and transport,” Ms Bio said.

“They should not be victimized again. This burden should be taken up by governments who can set up a mechanism to support victims.”

She also spoke out against the culture of silence about child abuse in Africa.

The President of Sierra Leone, her husband Julius Bio, had declared a national emergency in 2019 over the rape of a five-year-old girl who later died of her injuries.

He said 70 per cent of the survivors of sexual assault were under the age of 15 and that hundreds of cases of rape and assault were reported every day in the West African nation.

It must be noted that Ms Bio has built a network of female lawyers who voluntarily take on sexual assault cases.

“We hope all countries will ease the pain of these children because this is a destroyer of homes,” she said.

“When you talk to victims, to their family, you see the anger, the pain in their faces.

“This violates your space and body, takes away your dignity without your permission. This is why we want victims to be able to talk and Governments to prioritize this,” she said with passion.

In another development, speaking as a Guest of Honor for Africa’s First Ladies at the 9th Edition of Merck Foundation Africa, Asia Luminary 2022, which took place at the Hilton Hotel, Habtoor City, Dubai, the First Lady of the Republic of Sierra Leone, Dr. Fatima Maada Bio disclosed that women in Africa go through extreme societal stigmatization whenever they are faced with issues of infertility, as the African society often blames women for childlessness.

She used the forum as an opportunity to make a clarion call for support to be given to women dealing with infertility issues, and the need to avoid stigmatization, as men equally go through infertility issues that are less talked about.

‘’I believe babies are made by two people, hence the issue of infertility should be dealt with holistically and not in isolation,” she asserted.

“I am proud to share with you all that Merck Foundation has provided more than 1470 scholarships to young doctors from 50 countries in 32 critical and underserved specialties such as Diabetes oncology with many of them becoming the first specialists in their respective countries,” he said with pride. 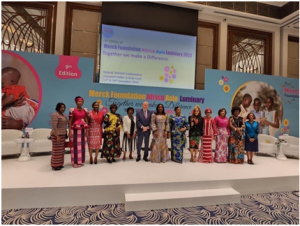