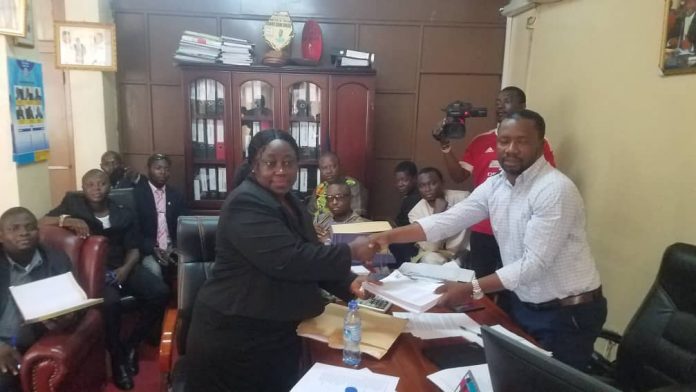 On Friday, 22 March 2018 the Legal Aid Board fulfilled a promise it made to clique members – a few of who were female sex workers – during the March 2018 elections by handing over two thousand four hundred and seventy-five (2,475) names of cliques member to the Youth Minister, Hon. Mohamed Orman Bangura for inclusion into one of the youth projects of the Ministry. Only 2% of those on the list are above thirty-years. The list also contains contact details including mobile numbers of clique members and their Five-Os.
The ceremony took place in the office of the Minister in the Stadium Hostel in Freetown.
As part of the initiative at ensuring Free, fair, credible and peaceful elections, the Board held sensitization meetings with Cliques in the Solidarity Hall of the Sierra Leone Labour Congress. These meeting took place in the period leading to the March 2018 elections. It was during these engagements that the ‘Crime to Career’ initiative was borne as part of a post office initiative for cliques.
The clique members had asked for something in return. They wanted to acquire skills that will give them a sustainable livelihood, so they will not have reason to resort to crime to make ends meet. “During these meetings, I was confronted with the question: ‘Mummy what are you going to do for us? and this really pricked my conscience,” she said.
Executive Director of the Legal Aid Board, Ms. Fatmata Claire Carlton-Hanciles said the Board’s Anti-Election Violence Initiative was support from the United Nations Development Programme (UNDP). ‘As a result of the support, the Board was able to train staff and partners, organized sensitization meetings on the electoral laws and engage with the electoral process.
She said she was pleasantly surprised to find out one clique member on the list was a degree holder. Some had Higher Teachers Certificate (HTC) while others had certificates in accounting and Information Technology. Also, there are those who have acquired skills in carpentry, painting and driving.’
The names which were drawn from over thirty-two clique groups were compiled by Paralegals of the Board. These include Bloodline of Smart Farm, Blue Flag of Mountain Cut, Gaza State of Hill Cut Road, Central Ross of King Jimmy, Orlorshoraw of Murray Town and KKK of Mount Aureol
Ms. Carlton-Hanciles said the Board targeted the cliques because they are among the most prone to violence. Most importantly, based on reports of violence perpetrated by cliques in December 2017 the Board decided to engage them through meetings to sensitize them on the electoral laws and also ensure they engage with the electoral processes. The Board also maintained regular contacts with them through Paralegals assigned to the various clique groups in the Western Area.
‘The wakeup call came, when some former clients of the Board were arrested for perpetrating election related violence,’ Ms. Carlton-Hanciles said. ‘Also, being one of the focal institutions for Goal 16 of the Sustainable Development Goals which speak to promoting peaceful and inclusive societies for sustainable development, we were obliged to do something.’
Ms. Carlton-Hanciles said the Minister has brought a breath of fresh air into the job because he is seen by youths as a role model and not as a Minister. ‘You are a young man who has gone through what these cliques are now going through and have been able to turn around your life for the better,’ she said.
The Minister of Youth, Hon. Mohamed Orman Bangura described what the Board has done as a ‘job in the right direction’.
He said a lot of factors are responsible for what the cliques are going through at the moment, part of which has to do with the fact that they have been ignored for too long. ‘We all have a role to play to turn their lives around and this is why the efforts of the Legal Aid Board in this direction should be commended,’ he said. ‘We should stop seeing youths as a liability. This is why we have to change the narrative and also help change their mindsets.’
He said his Ministry is committed to ensuring youths have the mindset to succeed. He noted that if the youths cannot make a better future when they are young, there will be nobody to take care of them when they are old. ‘This is why we are investing in them and we will ensure we account for any penny that comes to my Ministry,’ he said.
The Minister emphasized that team work is required at all levels to achieve the desired results. ‘The New Direction believes in team work and this is why we work as a team in my Ministry,’ he said.
He underscored the need to be serious about the fight against corruption to ensure resources for youth empowerment are not diverted into personal use. He also lamented the effect of drugs on young people. ‘When we came ito power Tamadol was selling for two thousand Leones (Le2,000) now it is going for five thousand Leones (Le5,000) and ironically it has boosted its consumption.
Mr. Bangura said his Ministry has developed programmes aimed at changing the lives of the youths. He said 10 Car Wash projects have already been launched in Freetown. He added that more will follow in the coming months. Also, the National Youth Service is ongoing. He noted that over 1000 more youths will be recruited into the scheme this year.
Projects lined up for the coming months include Youth in Commercial Transportation, Youth in Fisheries, Youth in Agriculture and the Entrepreneurship programme. He disclosed that the Ministry will be giving out 200 vehicles to youths as part of the Youth in Commercial Transpiration. Also, it will tap into the huge agriculture potential in Tormabom by having youths go into farming in that part of the country.
The meeting was climaxed with the handing over of files containing the names of 2,475 clique members from 32clique groups to the Minister of Youth by the Executive Director of the Legal Aid Board.