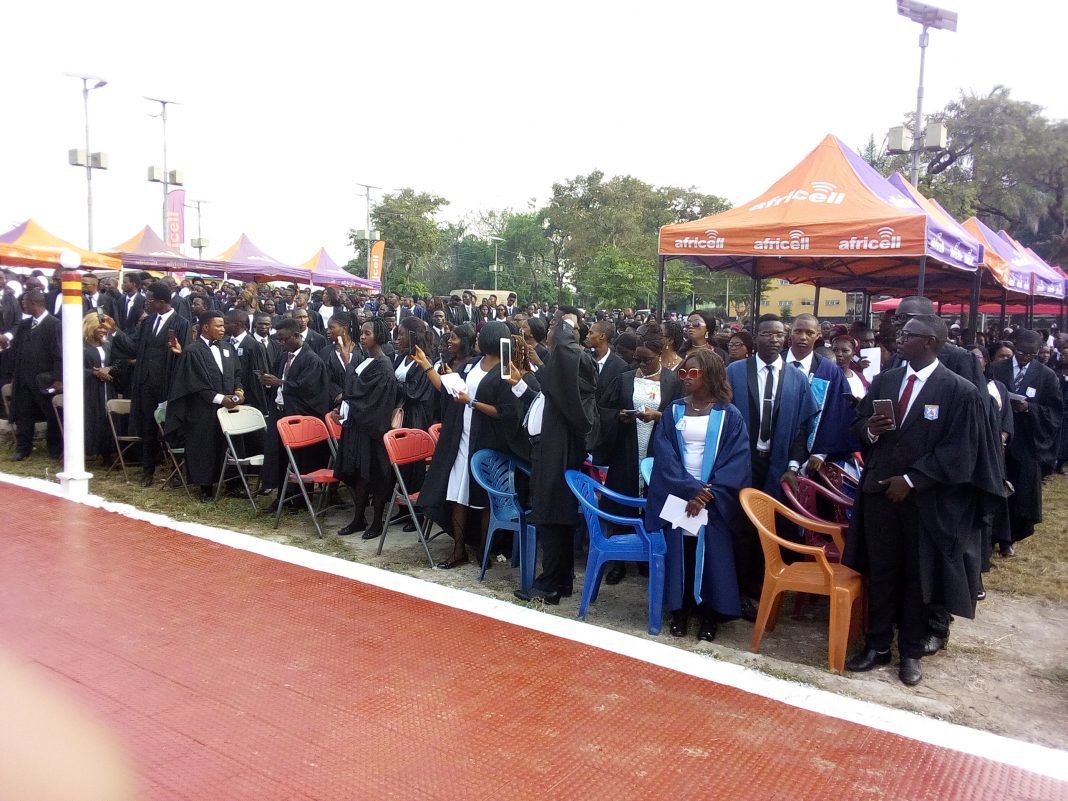 The Milton Margai College of Education and Technology (MMCET) polytechnic on Saturday 21st December 2019 held the 2019/2020 academic year matriculation ceremony for 2, 500 students of the three campuses of the polytechnic at a colorful ceremony at the Amphitheatre of the Goderich campus at which event the First Lady as keynote speaker observed that the future of the matriculants starts now underlining that education gives equal key to all stressing that only illiterates make mistakes and that government priorities education the reason for allocating 21% of the country’s budget to the sector.

She observed that education is now moving to the technological world, that soon robots would compete with human beings and affirmed the need for the country to catch-up by producing things for export to boost the economy highlighting that students should be game changers, encouraged them to talk about the wrongs in society disclosing that commercial motorbike riders and youths are renowned for impregnating young girls and that rapists would be jailed for life.

Mrs. Fatima Bio went on to appeal to students to study hard and focus on their education that is the greatest weapon, condemned sex for grades, that lecturers should not date female students, that she has launched the free sanitary pads project all in an effort to empower girls, told them to say no to peer pressure and have a dream to succeed asserting that the future of Sierra Leone is in their hands.

Earlier in his welcome statement, the Vice Principal and Director of Studies, Dr. Mohamed Alie Jalloh said it was a great pleasure and humility to welcome all at the ceremony that is a tradition at the college since its establishment in September 1963 by the first Prime Minister, Sir Milton Margai and that this was the first time for a First Lady of the country to visit the college reiterating that they would brag about the visit and appealed to the First Lady to visit the other campuses of the polytechnic.

He furthered that this year’s admission process was very competitive,  that the maticulants are the best and thanked them for the confidence reposed in the college enlightening that matriculation ceremonies in institutions the world over are to officially welcome students into the college after they would have taken the oath, pledged allegiance to and sign the college register to be officially recognized as bonifide students to enjoy the facilities offered by the college but warned them against breaching the college’s code of conduct that would attract appropriate action.

Dr. Mohamed Alie Jalloh also warned the lucky students to stay away from examination malpractices, cultism, sexual abuse and other social vices to become a source of pride to the citadel of learning, their parents and the entire nation.

The Headman of the Goderich community congratulated the maticulants, revealed that the community is happy that the land was donated to the college to develop the country’s human resource and that it is the wish of the community that the college is transformed to a Technical University which he reiterated is long overdue.

He continued that the community is also appealing that the college’s practicing school, the Lady Patricia Kabbah Memorial School, be upgraded to a Junior Secondary and warned land grabbers to stay off the college’s vast land or face the consequences.

The Chairman of the Alumni, National Branch, Mr. B.W. Bockarie admonished the students to take their studies seriously to acquire quality education affirming that government puts premium on education and by extension human resource development disclosing that the Alumni is happy with the appointment of Dr. Philip Kanu as principal due to his dynamism and transformational strides to improve the institution.

He continued that the college has dedicated staff, that they want to transform the College to a Technical University to train students in all sectors for the country’s middle-level manpower needs as well as teachers not only for Sierra Leone but other countries, that the college has the structures, vast land and staff who are prepared for the university status, appealed to government to help address the massive encroachment of the college’s land and entreated the maticulants to work hard to achieve academic laurels.

In his address, the Principal, Dr. Philip John Kanu commended President Julius Maada Bio for the confidence reposed in him to confirm his appointment as principal which he considers a privilege, that the day is epoch-making, that it is a privilege to work in the First Lady’s Office in the Off Our Girls Campaign reiterating that this year’s admission was strictly guided by the criteria set by the Ministry of Technical and Higher Education.

He informed that the college is experiencing a very strong transformation, that the institution would support the president to succeed as he puts premium on education, reiterated that education is power and the key to success, that the physically-challenged, those offering science subjects are entitled to scholarships, that there are 4,800 students and 650 staff at the college and acclaimed the president for being up to date with the payment of salaries.

Dr. Philip John Kanu also disclosed that lecturers are very supportive, that new toilets have been constructed, two buses for staff procured, CCTV cameras installed, established a state-of-the-art laboratory, that results are now published on time, that the college now has a website, twitter, instragram and face book accounts respectively, developed a five-year strategic plan aligned to the National Development Plan, signed MoUs with Technical Universities the world over as well as a conductive learning environment intimating that he is working assiduously with the Ministry of Lands to reclaim the college’s lands and underscored the need to transform the college to a Technical University to train the country’s middle-level manpower.

According to the principal, he has zero tolerance when it comes to academic excellence and discipline informing that a lecturer was recently dismissed for changing grades, lamented that one of their major challenges is land grabbing, disclosed plans by government to rehabilitate the college through the BADEA project and appealed to all to be patient to see the results of government’s development projects.

Earlier, the Master of Ceremony, the college’s Public Relations Officer, Ms. Elizabeth Sesay revealed that the admission process was rigid this year and that it is an honor to have the First Lady to serve as keynote speaker for the event.

She also urged parents to monitor their children as the matriculation ceremony is just the beginning of the long journey.

Highlights of the ceremony were the formal pronouncement of Membership of the College by the Registrar, who warned the students against social vices like cultism and examination malpractices, administering of the oath by the Senior Deputy Registrar, Mr. Manley Jeff Momo, sample signing of the College’s Matriculation Register, admission of the First Lady in the Performing Arts Department of the college with registration number 1555, donation of chairs by the First Lady, musical performances by Rose Marie Bayoh (Rosay) and the Entertainers, the vote of thanks by a maticulant and singing of the College Song.