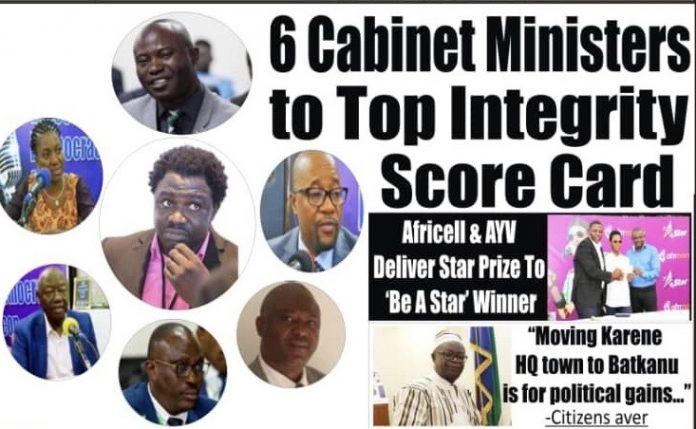 What has been described as a fair and very commendable assessment by a patriotic Sierra Leonean to really look at the performances and activities of six Ministers in the current Government headed by President Julius Maada Bio, most are now privileged to see how these Ministers had and are still performing in their respective Ministries.

This Press has had a preview of the Integrity Scorecard which is presently in the pipeline and to be released soon by the indefatigable Economist and Researcher, Prince Jacob Macauley and which will definitely act as a mirror after assessment of the respective Ministers in President Bio’s Cabinet.

The names of six Ministers have been found in the Score Card to have scored top marks among all the other Ministers. The six include the Minister of Finance, Jacob Jusu Saffa, Minister of Lands,  Dennis Sandy, Energy Minister, Kanja Sesay, Information Minister, Mohamed Rado Swarray, Mines Minister,  Rado Yokie and Minister of Foreign Affairs,  Nabeela Tunis.

Minister of Finance Jacob Jusu Saffa has often come under attack by the opposition for not addressing the bread and butter issues but he has remained focused throughout, working on the policies of Government and trusting that the long term effects of those policies would be in the interest of the country.

He is taking a two-pronged approach in rolling out those policies by first ensuring that the country is finally liberated from the debt burden that  hangs around the neck of this country said to have been created by the past regime and the second approach is to ensure that the bread and butter issues are addressed whereby the ordinary person on the street will feel the effects of such sound policies which will put food on the table of families and through job creation also put money in their pockets.

The Finance Minister has, over less than two years, built confidence in this nation, making it attractive for investors to come in large numbers to invest in the country because of his determination to establish a stable economy.
Lands Minister, Dennis Sandy, inherited a Ministry that was in shambles with thousands of land issues unaddressed by the past regime. In that direction, Mr Sandy, who works till late at night with crowds of people always at his office at Youyi Building, has been painstakingly addressing those problems with himself personally going to places where land matters are questionable.

Under the leadership of Dr Dennis Sandy, the Lands Ministry is regaining its lost glory as citizens have reposed confidence in the Ministry.
The Energy Ministry under ,Mr Kanja Sesay, is slowly but surely addressing  problems related to reliable electricity problems which once plagued the city of Freetown. Residents of the city are now enjoying uninterrupted power supply for almost 24 hours a day and seven days a week.

Mr Sesay has also extended his Ministry’s electrification activities to the rural areas, for example to a place like Newton and its environs where residents are enjoying solar light. Just recently a contract for an efficient metering system has been awarded so that the thieving of electricity will be put to an end.

Makeni and other big towns in the Bombali District are enjoying continuous power supply. The Districts of Bo and Kenema are getting there as Mr Sesay is addressing the problems associated with electricity supply in those places.

The Minister of Information Mr Mohamed Rado Swarray recently called a meeting of all the Agencies under his supervision and mapped out the way forward for all of them as well as encouraging all the agencies to cooperate with him so that his Ministry will live up to the expectation of President Bio.

One thing that added a feather to the cap of Mr Swarray is the move by his Ministry to make sure that the Seditious Libel Law of 1965 which criminalizes libel is finally repealed. Under Mr Swarray’s watch Agencies like SALCAB and SIERRATEL are gaining respectability again.

Minister of Mines, Mr Rado Yorkie, has proved his mettle in that Ministry just within the short time he took over. One thing that is a plus for him is that he is never in a hurry to sign Mining contracts which will not benefit the country. He is taking his time to make sure that contracts signed with mining companies will make the companies comply with the laws of Sierra Leone according to international standards. Mining Companies like SL Mining and Shandong which both gave raw deals to this country will never return to this land to continue from where they left.

As Minister of Foreign Affairs, Mrs Nabeela Tunis, has brought efficiency to that Ministry. Now the welfare of Sierra Leonean diplomats abroad are promptly and efficiently addressed.

The above named six Ministers have received high commendation from the assessment of the Integrity Score Card.

It is clear from the Integrity Score Card that the six Ministers all denied self to give selfless loyalty to the nation and President Bio who placed his trust in them that they will deliver according to his promises to the nation.