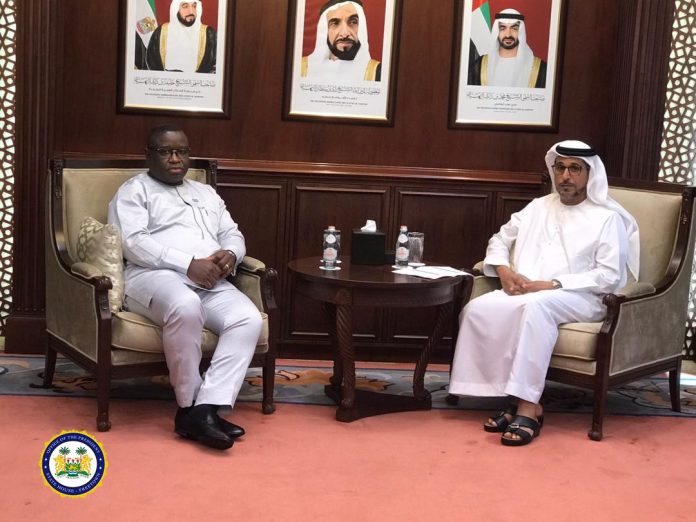 Leading Arab financial conglomerate, the Abu Dhabi Fund, in the United Arab Emirates has expressed interest to support Sierra Leone. This was disclosed to President Julius Maada Bio who was on a visit to the UAE.

The news which was broken on Wednesday 30 October 2019 stated that the Fund’s Director General His Excellency Dr. Mohamed Saif Al Suwaidi while holding a meeting with Sierra Leone’s Head of State His Excellency President Dr Julius Maada Bio assured him that the Fund would support development initiatives and projects of the Government of Sierra Leone.

The Abu Dhabi Fund is owned by the Government of UAE with focus on financing infrastructural project and supporting developing countries to achieve sustainable socio-economic growth.

The Director General said that he was honoured and delighted to meet President Bio and his delegation, and added that their institution has a very good relationship with Sierra Leone where they had operated before. He said they were looking to partner with the government in infrastructural and other development priorities.

“We are ready to implement government priority programmes. With the vision and determination that we have seen from your government, we think that Sierra Leone is on the right footing and we will be more than happy to help your country,” he said.

President Bio thanked ADFB for supporting Sierra Leone in the past and appealed for more support in the present and even future. He highlighted the challenges his government has encountered especially on the economy, but informed with effective management, the economy has now been stabilised.

“Priority has been placed on Human Capital Development as the basis for development with a focus on education, food security and health”, he informed his counterpart.

“We are a determined government and we have changed quite a lot in terms of the economy within this short time. We want genuine partners now who are ready to work with us in moving our country forward,” he concluded.

Also in the meeting were Sierra Leone’s Ambassador to the UAE, Rashid Sesay, Minister of Agriculture, Jonathan Joe Ndanema, Chairman of the Presidential Initiative on Infrastructure, Dr John Edward Tambi and the Director General of the Petroleum Directorate, Timothy Kabba.