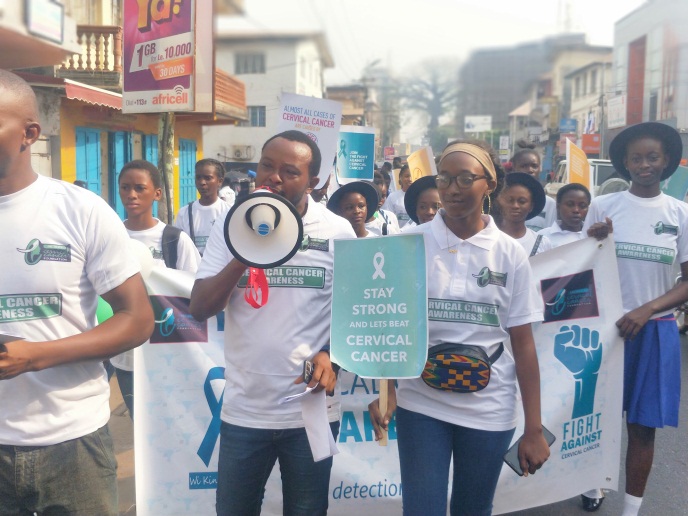 In order to join the world in celebrating Cervical Health Awareness month and raise the awareness on Cervical Cancer, Archer’s Cervical Cancer Foundation on 18 January 2020 held a one day awareness raising march past from the historical Cotton Tree to the Miatta Conference Centre in the Freetown Municipality.

Speaking to this medium in an interview President of Archer’s Cervical Cancer Foundation, Doreen Archer Campbell ,disclosed that cervical cancer is a type of cancer that occurs in the cells of the cervix ,which is the lower part of the uterus that connects to the vagina, adding that various strains of the human papillomavirus (HPV), a sexually transmitted infection, play a role in causing most cervical cancer.

She intimated how ACCF is joining the world to raise awareness on Cervical Cancer, adding that as an organization they have been engaging in raising awareness in various secondary schools within the Freetown Municipality and as always the 18th January is characterised by a Cervical Cancer walk out  informing that  it is against such a backdrop that they held a one day walkout which started at the Cotton Tree to the Miatta Conference Centre and  during the process they undertake educating the public about cervical cancer with the distribution of hand bills containing messages about cervical cancer.

Obstetrician & Gynaecologist at PCMH , Dr. Valerie John Cole, said that someone can reduce the risk of developing cervical cancer by having screening tests and receiving a vaccine that protects against HPV infection.

Dilating on the signs and symptoms of cervical cancer she mentioned vaginal bleeding after intercourse, between periods or after menopause, watery, bloody vaginal discharge that may be heavy and have a foul odour and pelvic pain or pain during intercourse

Staff of Rokel Commercial Bank, Alice Raymond,a participant expressed appreciation to Archer’s Cervical Cancer Foundation for joining the world to raise awareness on Cervical Cancer which she described as a disease that kills people slowly, adding that many people are ignorant about Cervical Cancer but said with this awareness raising it is believed many have been enlightened about not only the preventive measures but also the risk factors, signs and symptoms.