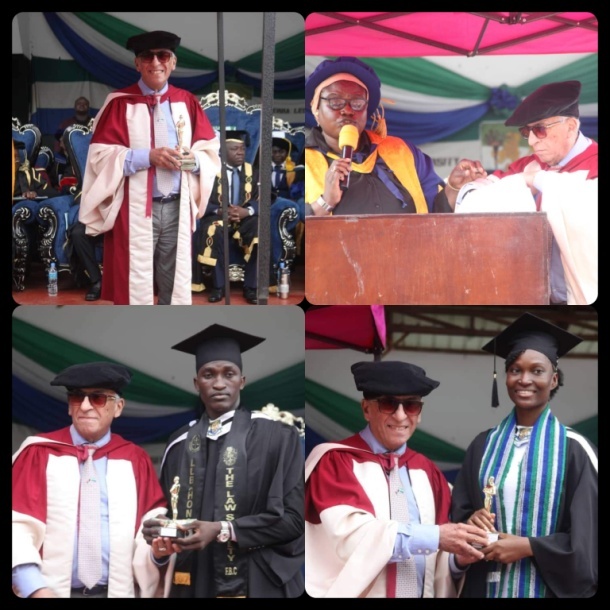 It was way back in 2005 when the Adonis Abboud Trust Fund (AATF) was launched during an auspicious programme during which it was underscored that the main objective of setting up the Fund is geared towards recognizing and awarding the best University Students, on a yearly basis, who academically performed exceptionally well leading them to graduate with flying colours.

The brain behind the establishment of the Fund was Dr Adonis Abboud, who also doubles as the Chairman of Transnational SL Ltd and Founder of Pikin Bizness.

In an exclusive interview, he intimated this medium that the recognition and support given to the Best Male and Best Female graduates from tertiary institutions is meant to identify and raise the morale of the recipients who over the years excelled in their various academic pursuits.

Dr Abboud furthered how students of FBC, IPAM, College of Medicine, Njala University, EBK University, MMTC, IAMTECK and University of Makeni (UNIMAK) at anytime stand the chance of benefitting from the Trust Fund as it has been in the past.

He underscored that the selection of the Awardees is strictly done by the Administrative Wing of the Universities.

On the 8th April, 2022, the University of Sierra Leone conferred degrees on students of the College of Medicine and Allied Sciences (COMAHS), the Institute of Public and Administrative Management (IPAM) and Fourah Bay College (FBC).

During the graduation ceremonies, the Adonis Abboud Trust Fund awarded trophies and cash to the Best Make and Female Students. In addition, it also offered one (1) Oxymeter each to 54 graduands who graduated as Doctors from COMAHS. An Oxymeter is a digital gadget that gives instant reading of the percentage of oxygen in a person’s blood as well as the heart pulse rate.

All the aforementioned graduates received trophies and cash from the Adonis Abboud Trust Fund in honour of their outstanding academic performances.

In his statement delivered, Dr. Abboud reconfirmed his organization’s commitment to recognize and motivate students who have excelled in Universities.

He further disclosed that the gesture marks another episode of the educational support that the Trust Fund has been rolling out with the main objective of enhancing educational standards in the country.

Dr. Abboud stressed that his organization has nothing to do with the choice of the winners of the awards as their names were provided by the three colleges of the University of Sierra Leone to the organization maintaining that such has been the norm or practice over the years.

The AATF Chairman averred that without a healthy and well educated citizenry a country cannot develop maintaining how it is against that backdrop that the Trust Fund has been providing support to University students or graduates in Sierra Leone.

He intimated that the Colleges provide the right type of education which will put the graduates at vantage positions to contribute positively to overall national development.

“It is your turn to use your qualifications as springboard for the currents that will dominate the nation’s landscape politically, socially and economically from now on,” he enjoined the recipients concluding that the gesture is his own little contribution to efforts to challenge students and get the best out of the dwindling pool of talents available to carry the burden of the nation’s future.

All the recipients from the three constituent colleges expressed profound thanks and appreciation to Dr. Adonis Abboud for what they described as a timely gesture and promised to positively contribute to overall national development in diverse ways.