For the very first time the President of the African Development Bank Group, Dr. Akinwumi Ayodeji Adesina paid a visit to Sierra Leone. He jet in on the 11th March and will depart today, the 13th March, 2020 after a three days successful official visit.
During his visit, he met with the President of the Republic of Sierra Leone, Dr. Rtd. Brig. Julius Maada Bio, Minister of Finance, Jacob Jusu Saffa and other Ministers of Government, heads of Government agency and other development partners.

“Dr. Adesina had the opportunity to get firsthand information from critical stakeholders of the State on the development priorities, progress and challenges that will allow him to support the financing of projects and programmes that will resonate with the aspirations of the people of Sierra Leone,” Sahr L. Jusu, Financial Secretary said.

On the 12th March 2020, the Minister of Finance held a meeting with the President of the African Development Bank where he thanked him for his visit to the country and also for the interventions of the Bank since 1967. He also took the President through the Macro and Micro economic challenges the country is faced with and what the Government is doing to stabilize the economy, where he highlighted job creation through agriculture and entrepreneurship as major areas the Government is exploring.

Jacob Jusu Saffa called on President Adesina to share his experience as one time Minister of Agriculture in the Federal Republic of Nigeria on how he was able to transform the rice situation in their country, citing the huge rice potentials of Sierra Leone.

He stressed the need for more support in agriculture to attract the private sector in supply chain management for the availability of seeds and fertilizers.
In his response, the AfDB President expressed his delight to be in Sierra Leone and committed the Bank’s support in different sectors with emphasis on agriculture.
President Adesina stressed the need to have private sector players in the agricultural sector and how to use technology and digitization to help farmers access seeds and fertilizers.
He said Government should not be in the business of seeds and fertilizer but rather a strong agro-industry and value chain.
The President commended the strides of the Government towards economic recovery and stability.
Dr Akinwumi Ayodeji Adesina is the 8th elected President of the African Development Bank Group. He was elected to the position on May 28, 2015 by the Bank’s Board of Governors at its Annual Meetings in Abidjan, Côte d’Ivoire.

Dr. Adesina, 58, is a distinguished development economist and agricultural development expert with 25 years of international experience. He is the first Nigerian to serve as President of the Bank Group.

He served as Nigeria’s Minister of Agriculture and Rural Development from 2011 to 2015, during which time he implemented bold policy reforms in the fertilizer sector and pursued innovative agricultural investment programs to expand opportunities for the private sector.

In his entourage were the Director General Marie-Laure Akin-Ologbade, Executive Director Kenyah Barley, AfDB Country Manager for Ethopia, Abdul Kamara and other staff of the Bank. 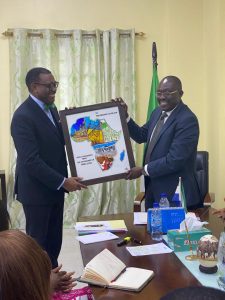 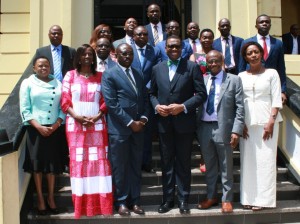