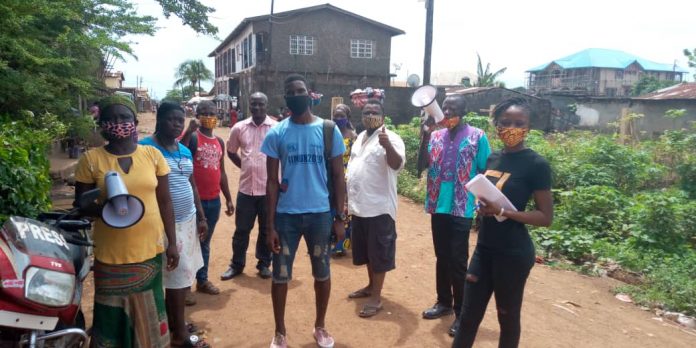 Yvonne Aki-Sawyerr Mayor of the Freetown City Council- Yvonne, former Director of Planning at the National Ebola Response Center  (NERC) during the Ebola epidemic thought it fit to inject her wealth of experiences and expertise in the fight against the roving pandemic. Through the knowledge gained in the defeat of the Ebola epidemic couple of years ago, she has now sought to embark on localizing the fight against the dreadful monster (Covid-19).

In her strides and efforts to actualising her dreams of defeating the Covid-19 in the Capital, she thought it prudent to engage Ward Councillors as well as Ward Committee Members across the 48 wards under her watch on an intensive training program.

These trained Councillors and WDCs were capacitated with the requisite COVID-19 education and messages that they could efficaciously serve as community champions in sensitizing, educating, and influencing their people of  various communities in ensuring adherence to all the necessary precautionary measures that should  be used to curtail and contain the  pandemic.

The commencement of this community engagement on Saturday, 25/04/2020, across almost all the municipalities has vividly unravelled the need for such bottom-top approach as the nation is trying to decelerate the speed of the virus.

Through engagement with community people, it came to be realized that many held different perspectives about the virus. Some hold the belief that the virus is real but not here, others are still skeptical about its existence looking at the massive death rates in the Far East and the Western world and the slow pace of deaths or its shocks in our country. However, with this timely training, the Councillors and WDCs have started engaging their communities and these engagements are proving fruitful and so worth the efforts to obliterate the former perceptions and myths locals have towards the virus that has caused a total halt of operations in all spheres of our socio-economic activities.

A Community Chief revealed to this medium that during the Ebola epidemic, he was solidly informed and involved in  the fight against Ebola as he was trained by so many organizations including SMAC to be able to actively take part in the fight. But the COVID-19 fight is a different ball game altogether as till date there has not been any training or dialogue from any organization or NGO with regards the current virus. Thus, he urged the authorities concerned to localize the fight and get them involve.
He however commended Mayor Aki-Sawyerr for such an approach.