According to the citation, the US Ambassador was honoured for her exemplary role in fostering democracy and good governance, building resilience in national institutions, supporting disaster preparedness and management, enhancing human capital development especially through the education and health sectors, improving energy access, promoting women’s empowerment in Sierra Leone.

Receiving the award, Ambassador Brewer, who arrived in Sierra Leone in 2017, said that she was honoured and humbled by the ceremony, saying that she truly loves Sierra Leone and was glad that her love had been received so well.

While accepting the honour, she also recognised the work of her colleagues who had supported her over the years and spoke of the friendship between the two nations. 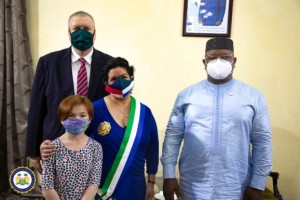