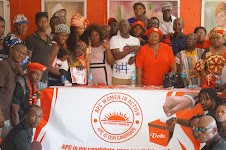 The Women in Action group of the All People’s Congress (APC) Party has on the 4th January 2023 intimated the party’s Task Force that the group was primarily formed to support any presidential candidate elected at its National Delegates’ Convention for the June 2023 elections underscoring that they are strongly against the formation of camps, factions and other groups within the party.

That disclosure was made at the party headquarters on Old Railway Line, Brookfields in Freetown while members of the Women in Action group were addressing the party’s Task Force, the grassroots of the party.

One its members, Kadi Sesay, revealed that they are all members of the APC, that the group was formed to among others serve as a pressure group to the party’s Women’s Congress and the party itself, that they do not have candidates of their choice but the APC, that there is no vacuum in nature, the reason they are supporting the National Executive to effectively function until the conduct of a Convention and Delegates’ Conference, called for a timetable for the conduct of lower level elections revealing that they had held a meeting and presented their resolution to the Interim Governing Council Team of the party.

According to her, APC members are all one firmly united family, appealed to all to stop backbiting, embrace unity and love, recalled that in the past the party’s lower-level elections were peacefully conducted to the applause and administration of all and called for peaceful and transparent general elections in June this year reiterating that if the party wins the elections the victory is for all members.

She added that they have members nationwide and abroad, that the group would soon be launched to fill gaps within the party before the National Delegates’ Conference after which they would throw their weight behind the presidential and other candidates that would emerge winners to contest the General Elections in June this year.

Santigie Bangura, Director of Operations, APC Task Force thanked the Women in Action group for recognizing them as a unit, praised the group for their initiative in coming together and revealed that the party has a lot of work to do ahead of the elections but was confident that the party will succeed in the coming elections.

Danke Edward Kargbo, a member of the group intimated that the Task Force plays an important role in the party, recalled that her late father was a founding member of the party and called for unity within the party to win the next polls.

Other members of the APC Women in Action group including Wotay Dura assured that they would ensure that the Task Force is upgraded to make members independent, that they are all one family, urged the Task Force to continue its good work, that the party’s struggle started long ago, that they would ensure that the right candidates are elected, appealed to them to focus on the party and not individuals as well as vote for the right candidates and underscored the need for peace and unity within the party.

The event was well-attended way beyond the expected numbers and ended with the singing of the party’s Victory Song and the vote of thanks with a sense of jubilation among the crowd.