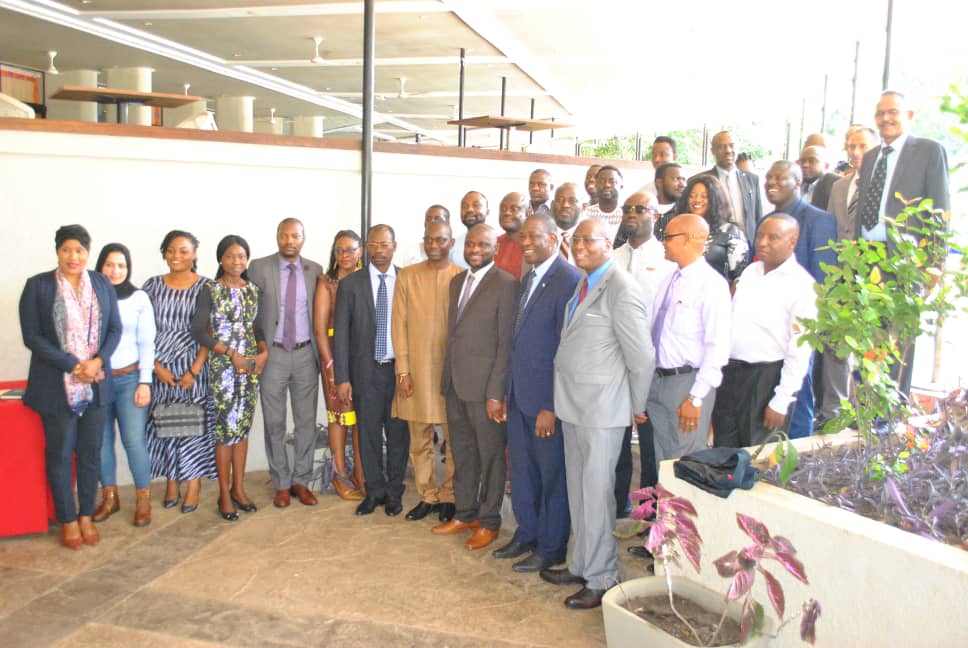 Another chapter was turned in the history of the African Union (AU) when on Wednesday 30th October, 2019 it commenced a-two day meeting on the improved engagement between civil society and the Government of Sierra Leone.

In a brief statement, the AU Policy Officer for Citizens and Diaspora Directorate Kyeretwie Ose stated the bilateral relationship between CSOs and African governments.

Executive Director for the Society for Democratic Initiative (SDI) who also doubles as the Chairman of the African Union Economic, Social and Cultural Commission (ECOSOCC), Emmanuel Saffa Abdulai Esq welcomed Government officials and Civil Society Organizations. He outlined the importance for CSOs to meet and discuss, considering the current relation between civil society and governments across Africa.

Mr. Abdulai described the meeting as a welcoming initiative, stating that  elected leaders or government will map the way out to give citizens a better life. “Government and CSOs are partners in development,” he said, adding that Civil Society cannot survive without government’s support. “CSOs have a mandate of creating a space between institutions and the general citizenry, thus becoming the voice of the voiceless,” Mr. Abdulai maintained.

Speaking on behalf of ECOSOCC, the Deputy Presiding Officer West, Mr.Moe, described the two days meeting as very important. He welcomed participants from the different countries on behalf of the ECOSOCC West Chapter with the hope that the discussions would be fruitful in the end.

“The AU believes that, there would be no development without ownership in shaping the wider destiny of the Africa we all want”, he said. “The imperative of the two days engagement owes as much to the provisions and principles of the constitutive act of the Union which creates space for popular participation in the union development agenda by 2030”

“It is important to note that, there has been an unstructured working relationship between government and civil society and it’s the belief of the AU that we should engage constructively as the space given to civil society and non-state actors in the AU agenda”, he continued.

Delivering the keynote address, Deputy Minister of Political and Public Affairs, Mr Amara Kallon emphasized the importance of people working to influence their world from outside government. He stated that civil society and government are key partners and should always work together for the success of democracy on the Continent.

CSOs like Advocacy Movement Network (AMNet) among others have been working with Government on Peacebuilding and Human Rights. “The priority of any State is to provide security for its citizens. A democratic state must have an effective government  that should create and enforce laws, settle disputes and keep the peace”, he said.

Mr Kallon noted that, government working in isolation will make a nation stagnate so therefore, needs civil society as a sceptic, a partner and a challenger for the general good.

The Deputy Minister furthered that when civil society have freedom, it can move mountains and with enough support, CSOs can push government towards fundamental change.

“Although traditional media is still important, no longer can governments prevent the spread of ideas they don’t like merely by denying them space in the mass media. News is no longer a one-way stream in which those with power determine what information will be shared and what ideas the people will be trusted with”, he informed.

He further said that, empowering civil society does not only holds the key to a nation’s democracy and prosperity, it’s also vital to a nation’s security, noting that there is no better time to begin that empowerment than now.

“A well-developed democracy and more political dialogue will require deep and difficult changes. It will require reforms to nation’s laws, institutions, and political culture to expand individual liberty, freedom and responsibility”.

Mr. Kallon suggested that, NGOs having got the right to criticize – a right they must have, they should also obliged to search for solutions in good faith with the government, just as government must open its decision making processes and encourage public debate.

“Civil Society has every right to demand the highest standards of government bodies and officials, but to speak with credibility; civil society must model the integrity it wishes to see in the State and must be open to critism”, he concluded.