Head of Hygiene at the Institute, Mohamed Sultan Turay, said that they were pleased with the generous gesture by the President and his wife, saying that the furniture would help their students in the process of acquiring their various skills. He commended the First Lady for her “Hands Off Our Girls” initiative.

First Lady, Madam Fatima Maada Bio, said that the donation was in line with their vision to support the empowerment of women and girls in the country. She said that President Bio cares for the well-being of women and girls and is ready to provide them a safe and conducive learning environment, adding that the President would like to leave a solid legacy in the country built on education.

On his part, President Bio commended the First Lady for her efforts in the development of women and girls in the country. He said he was pleased with the work done at the center because it would help to improve the lives of women in that part of the country.

He said that women who had had the opportunity of being reintegrated into the society should always serve as agents of change. He, therefore, encouraged them to make good use of the facilities by working harder to become meaningful citizens in the society. He assured that they were ready to develop the center into a well-equipped technical vocational institute.

In another engagement, President Bio unveiled his statue built by the people of Port Loko City in recognition of all his development efforts in the district, especially the introduction of the free quality education initiative. 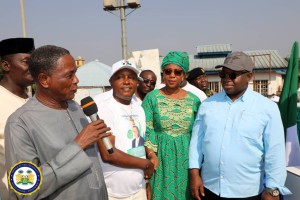 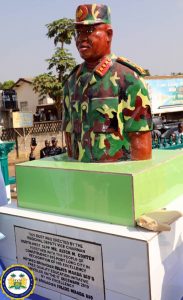