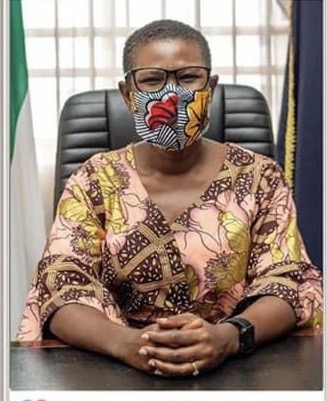 The Freetown City Council (FCC) on the 22nd June 2020 held a consultative meeting with a cross section of the Krio Descendants Union and the Krio Community based on the request of the latter. Some of those present at the meeting were Samuel Valcarcel, Kobi Walker, Christoph E. F John, Josephine Buck, Alhaji Savage and Madam Femi Claudius-Cole.

This medium was made to understand that the main objective of convening the meeting was geared towards addressing the concerns and provide clarification about Freetown City Council’s (FCC’s) new stance on property rates and business license reform.

Lasting for three hours, Mayor Aki-Sawyerr succinctly made it abundantly clear that there has been a fundamental change in the way properties are being valued, which therefore has culminated in some property rates increasing whilst others have decreased.

The result oriented, eloquent and very pragmatic FCC Mayor presented to those present during the meeting factual data that ascertained that the annual property rates for 80% of all properties in Freetown will still be Le500,000 or less with the new system. In other words, that sum amounts to about Le42, 000 per month.

According to what she told those present with the property rates system not having been reviewed for decades, FCC has not been able to effectively deliver the services its residents want, from maintenance of the Metropolis eleven (11) cemeteries to provision of adequate numbers of sanitary inspectors and much more.

It was also discussed that there is the need for a policy for pensioners and those with extenuating circumstances. The Mayor further clearly underscored that the property rate is an annual charge that can be paid in monthly instalments.

She intimated how the FCC has extended this year’s due date for the payment of property rates to the end of September 2020 because of the prevalence of the COVID-19.

This medium also learnt that the meeting was very constructive with those in attendance also confirming that they now have a better understanding of the property rate reform and are very supportive of it.

Mayor Aki-Sawyer assured that the FCC will continue to engage all Freetonians to ensure that misconceptions about the new system are clarified. She revealed how there is an Enquiries and Appeals Desk at FCC and residents are encouraged to call 078333000, 088333000 or 034333000 if they have any questions or concerns about their property rates or business licenses.

In an exclusive interview with Mayor Yvonne Aki-Sawyer she stated that her heart was breaking at what the city was becoming maintaining that in her two years a lot has improved within the Freetown Municipality.

“Gutters have been dug in flood-prone areas, dustbins have proliferated throughout the city, grass is sprouting from a roundabout once strewn with litter and there is still much to do. Electricity flickers. Taps run dry. Rubbish heaps bigger than football fields still fester,” she lamented.

She averred that last year the cash-strapped Freetown City Council got around 70% of its budget from foreign donors. “Revamping property taxes will bring in five times more revenue this year and it is prudent for payments to be made directly into a Bank account rather than be paid in cash,” she said adding how such are big reforms on a continent where property taxes bring in less than 0.4% of GDP compared with about 2% in the rich world.

The Mayor bemoaned that she is ashamed to call home a city that struggles to maintain its own cleanliness and sanitation and every year has to send its elected leader cap-in-hand to a white man/woman to beg for money to clean the city’s mess created by its own citizens who then do not want to pay for that cleaning.

She affirmed how she is ashamed that her fellow Freetownians expect the taxpayers of European and North American countries to pay for the cleaning up of our garbage because we are hard-pressed during COVID time as if they are not affected.

“I am not aware of a citizen in any country or society that enjoys paying taxes but however they must understand that it is the price they pay for living in an orderly and civilized society,” she argued.

She added that our choice is to pay for our crap to be cleaned or to ask John Bull to pay for it stating that John Bull never does anything for free as we will have to pay in return one way or the other.

The Mayor called on Freetownians to step up and pay to clean up the city. In a philosophical tone she said:  “If you want deferred payments stagger the rates at which you trash your city, defer your next defecation until you can pay your taxes. Perhaps when you experience the pain of constipation you might prioritise these payments that are largely going towards our own sanitation and hygiene.”

She asserted how she can understand, though she feels it is wrong, that political appointees are politicizing the issue for their own ends but said she is expecting more from Freetownians.

When this medium went out to gauge the views of some Freetownians on this new development, a prominent business man have this to say: “I have followed with keen interest the few that have criticised the Mayor on property tax increments for one set and possible reduction for others…Freetown is only implementing what Bo did over a decade ago – introduce a GPS AUTOMATION SYSTEM that has a mill rate (base rate) for all properties. There are additions and subtractions based on Location, Size, Quality, design etc.

In other words the more valuable and better located the property the more the additions, and for the masses the lesser the value and the more inconvenient the location, the more the deductions on the mill rate. This system was rejected by the FCC for so long whereas the most progressive and arguably the best Mayor/Chairman since 2000, if not ever, Bo City’s former Mayor Dr WUSU SANNOH, grabbed the opportunity and modernised the property tax law in Bo. Those complaining should take a second back and appreciate that for 10 years FCC allowed them to pay far less than their compatriots in Bo city for example.”