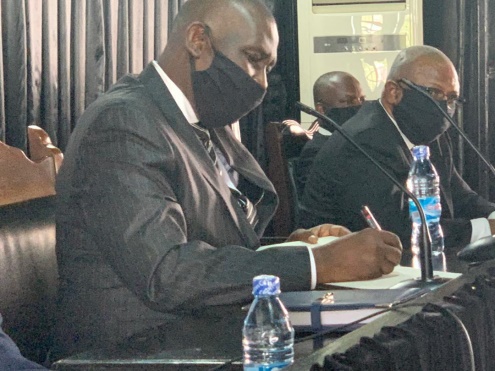 On the 14th May 2020 the Chief Justice, Desmond Babatunde Edwards and Judges of the Superior Court of Judicature signed a book of condolence for one of their fallen colleagues, His Worship Magistrate Edmond Kahoni Ngeinda Cowan at High Court No. 1 in Freetown.

In his statement, the Chief Justice revealed to the family, Judges, Magistrates, members of the Sierra Leone Bar Association etc, that Magistrate Cowan was one of the finest Magistrates that will be profoundly missed by the staff of the Judiciary. Describing the type of person he was, Hon. Chief Justice said, Magistrate Cowan had been a very kind and humble person who dispensed justice without fear or favour and above all treated all manner of people with dignity and respect. He said Magistrate Cowan had played his own part and he will be bountifully rewarded by his Maker.

Justice Komba Kamanda and other Magistrates described Magistrate Cowan as a fine character, a good listener, adviser saying he made a lot of sacrifices to his job. They said he will be sorely missed by all that had come in contact with him.

Giving the biography of Magistrate Cowan, the Master and Registrar of the High Court of Sierra Leone, Elaine Thomas- Archibald, said Magistrate Edmond Kahoni Ngeinda Cowan which sad event took place on Sunday 10th May 2020, aged 53, was the first of two children of Marian and Edmond Cowan of blessed memory and was born in London on the 12th December 1966. He attended the Prince of Wales Secondary School following his primary education at the Leone Preparatory School.

On completion of his secondary school, he proceeded to the United Kingdom for further studies. After several years of work and study in London, he returned to Sierra Leone with a Bachelor of Law Degree and entered the Sierra Leone Law School. He was called to the Bar in 2009 and joined the Judiciary of Sierra Leone as Deputy Master and Registrar. He was later appointed a Magistrate, a position he served till his death.

The book of condolence for the late Magistrate Edmond Cowan will be closed today Friday 15th May 2020 at 2.00pm.