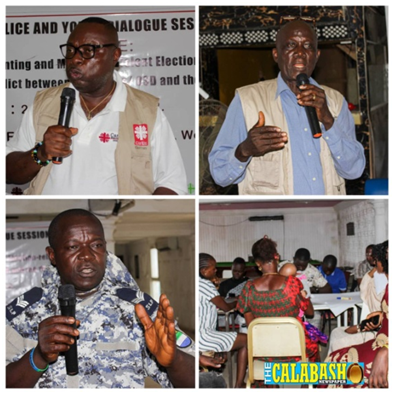 Caritas Freetown, with support from Trocaire, Gianondo and other sponsors, has on the 20th September, 2022, organized a one- day Police and Youth Dialogue Session on the theme: “Preventing and Managing Violent Election-Related Conflicts”, targeting personnel of the Sierra Leone Police Force and the Youth. The event took place at Kondi Hall, Yam’s Farm in the Western Rural District.

Giving an overview of the event, the National Director of Caritas Sierra Leone National Office, Aloysius K. Kamara, stated that many a time there have been misunderstandings between the Youth and Police with the two often blaming each other.

According to him, they convened the dialogue for the two parties to have better understanding of themselves as the country is fast approaching the electioneering period.

He encouraged the youths to always maintain peace, national cohesion and to refrain from all forms of violence furthering that they should not allow themselves to be used by any set of people or individuals to perpetrate violence.

Aloysius K. Kamara also admonished the Police to carry out their duties responsibly stating that they should be in a position to manage conflicts amicably.

Rev. Father Peter A. Konteh, in his keynote address, noted that the dialogue is indeed timely as it comes during an important period, when the country is preparing for General Elections to be held in 2023.

He continued by stating that bringing the two sides together is geared towards promoting dialogue and greater understanding among the Police, the Electoral Commission and Youth on their roles and responsibilities to prevent and manage violent election related conflicts in order to ensure an enabling peaceful environment is achieved before, during and after the elections.

Rev. Father Konteh maintained that during electoral processes and elections, the security forces, especially the Police have a central role in providing security and ensuring safety during voter’s registration exercises, political rallies and events, transportation of election-sensitive materials and keeping peace on Polling day.

“The Youth also have an indispensable role to play in determining Sierra Leone’s progress towards a more peaceful, democratic and prosperous country,” Father Peter Konteh intimated.

“You will agree that violence and electoral politics are no strangers to one another on the African continent. Sierra Leone not been an exception is entering an important societal and political period. Tensions and stress are already on high levels due to the difficult economic situation and significant increases in living costs over the past year,” he stated.

Father Peter Konteh said out of experience over the past years, this is the time when tension and disagreement mount and competition for ideas and underlying conflicts can become violent.

“So it is during this time that dialogue, communication, patience, and empathy are paramount, ” Father Konteh stated.

He disclosed that the youths are the most affected when violence and conflicts related to elections erupt and according to him they are also the perpetrators of violence during elections.

“Conflict prevention is not a business for the faint hearted, those looking for quick returns or congenital pessimists,” he informed.

He recommended that it is essential for all to work together to ensure that the 2022 elections and democratic processes will be held in a peaceful environment.

Marie Bangura, Chairperson of the Western Area Rural District Youth Council commended the organization for organizing a dialogue session between the Police and the Youths adding that it is very timely after the August 10 violent protest.

She further admonished youth participants to deviate from violence and also cascade the information and knowledge gained to their colleagues back home.

Lansana Fofanah, Head of Operations of the  Special Division of the Waterloo Police Station told the participants that Police are not their enemies, and should not be seen as targets.

He stated that they are carrying weapons as a protection for themselves and not to harm anybody but to serve the people underscoring at the end of the day they are all civilians maintaining that they and the Youth  must come together to push the country forward.

Mohamed Turay, Chairman of the Bike Riders East said one of the causes of conflict between the parties is that the Police Officers see the Youths as a threat continuing that as riders they suffer too much harassment from the Police.

He revealed that as a leader he was able to mobilize his fellow bike riders to refrain from the violence that took place on August 10.

Rebecca Moseray, one of the participants, thanked the organization for such an educative dialogue and stated how she would go back to her community and pass on the message she has learnt.

The event was climaxed by a group work to come up with solutions related to how the two parties can be united to maintain law and order for the forthcoming elections to be violence-free and very peaceful. 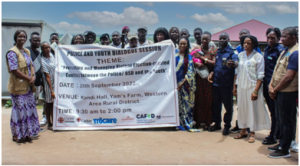 The Impressive Story of an Ebola Orphan: Musu Dumbuya