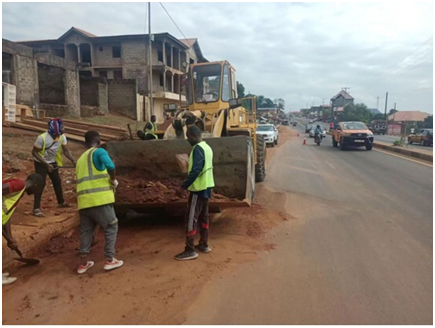 In two recent publications by one of the local tabloids in the country, the China Railway Seventh Group (CRSG), was bashed, in a one-sided perspective, accusing the company of breaching its contractual agreement, reneging on maintenance of the toll road (the Wellington –Masiaka Highway), that the paints are not properly kept and one of the toll poles which was severely dented following a car accident a couple of months ago is yet to be repaired, that dirties are visibly seen on the sheds which housed the toll agents from Hastings to the Masiaka tollgates, the appalling work on the drainages and that when it rains heavily the road gets flooded with debris washed away from the hills.

The allegations made against the company may seemingly appear alarming but thorough investigation proves that they are not only over-exaggerated but hollow and far from the truth as many, whose views this medium sought to shed light on them, have attested.

In order to react to aforementioned allegations, the Management of the China Railway Seventh Group (CRSG) engaged members of the Press in a meeting it convened at the CRSG Camp at Mongegba, Grafton on the 26th July 2022. Present were the Finance Director/Acting Head of CRSG, Ren, the Administrative Manager -Alhaji Kamara, the Logistics Manager -Alfred Kamara-, the Consultant for CRSG- Ing Munda Rogers, and journalists from different Press Houses.

It was established by the Acting Head of CRSG, Ren, that the China Railway Seventh Group (CRSG), as the investor and contractor of the Wellington-Masiaka highway, is a responsible international company.

He intimated that as an international investor, CRSG is concerned not only with generating profits but also ensuring that the lives and satisfaction of Sierra Leoneans and other nationals are always secured and assured.

The Acting Head of the company furthered how the toll road system is providing aesthetic pleasure to both foreigners and Sierra Leoneans maintaining how such is positive sign of development in the country.

He continued that in terms of the cost of the toll, in terms of comparison of costs among Sierra Leone, Senegal, and Ghana, for instance, it will clearly reveal that the cost in Sierra Leone is about half of those in Senegal and Ghana.

“This beautiful highway and advanced toll plaza facilities have become a unique landscape,” he continued mentioning how the road has improved the overall beauty of Freetown and become a “landmark” construction of Sierra Leone, deepening the impression of the whole city and even the whole country to the world.

He debunked the allegations made against the company  stating that, understandably, although the company continues to face various challenges, including rising fuel costs, and lack of materials it is doing its best to provide the best service to its customers and as well adhere to the terms and conditions of the contract

“It must be made clear that it is not the wish of the company for some of the drainages to be filled with mud but it must be noted that such is as a result of the impact of rain-washed gravel caused by residents digging and building facilities everywhere along the road,” he categorically clarified adding how the company is most often engaged in repairing and replacing of damaged facilities and cleaning up the mud in a timely manner just to keep the highway unimpeded.

He hammered home the point that CRSG’s normal road maintenance has been carried out since the beginning of construction, including annual ditch cleaning, road surface cleaning, green weed cleaning, road marking and repair of road surface deterioration caused by various reasons.

The Acting Head laughed over the mentioning by the local tabloid of dirties visibly seen on the sheds which house the toll agents from Hastings to the Masiaka tollgates stating that if the author means dust then he should be joking as that should be expected. He said other than that he must be joking if it is Management that should clean the sheds maintaining that it will be absurd to think of keeping piles of garbage.

Ren said, in addition to the timely and effective maintenance of the Wellington-Masiaka highway, CRSG has also helped communities and villages along the highway as much as possible with infrastructural support work.

He revealed how on several occasions, CRSG has helped to repair the damage of the feeder roads caused by the rainy season and the passage of heavy vehicles stating how those works are free adding that the company also provides machinery, manpower, granite and other production factors in helping communities repair damaged roads.

“Under the above unfavorable conditions, CRSG has never complained and still adheres to its Corporate Social Responsibility seriously and makes contributions and donations to surrounding communities and organizations every year,” he further disclosed.

He continued that whenever the community or residents around Wellington-Masiaka highway encounter difficulties, such as community road maintenance, community center construction assistance, school facilities and material donation and so on, CRSG always provides timely and necessary help.

On his part, the Consultant of CRSG, Ing Munda Rogers, stated that the company has been very compliant with almost all the provisions of the contractual agreement. He stated how the toll road has contributed to the reduction of unemployment and how the company is paying all its taxes. The former Head of SLRA talked about how some people are in the habit of just abandoning derelict vehicles along the highway stating that people must use the road for what it was designed for adding that parking must also be done properly.

He disclosed how it was him who initiated the toll road project stressing that Government was not having the money at that time and even now to fund the construction of the road.

“Since the road came into use there has not been any major fatal accident which is an indication that the company is really adhering to the provisions of the contractual agreement,” he maintained, adding that although global events and the increase in foreign exchange of the Leone are placing pressures on the company yet the company is adhering to what it is supposed to do. He said with its standardized and modern operation management mode, the China Railway Seventh Group, continues to provide high-quality services for highway users and is effectively promoting economic development along the road. 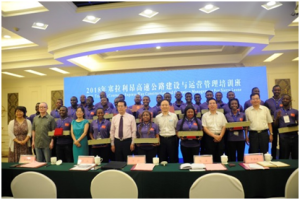 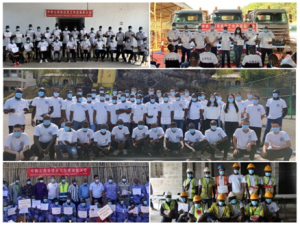 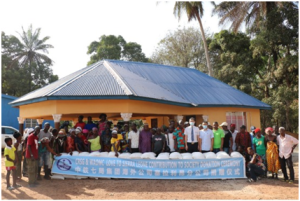