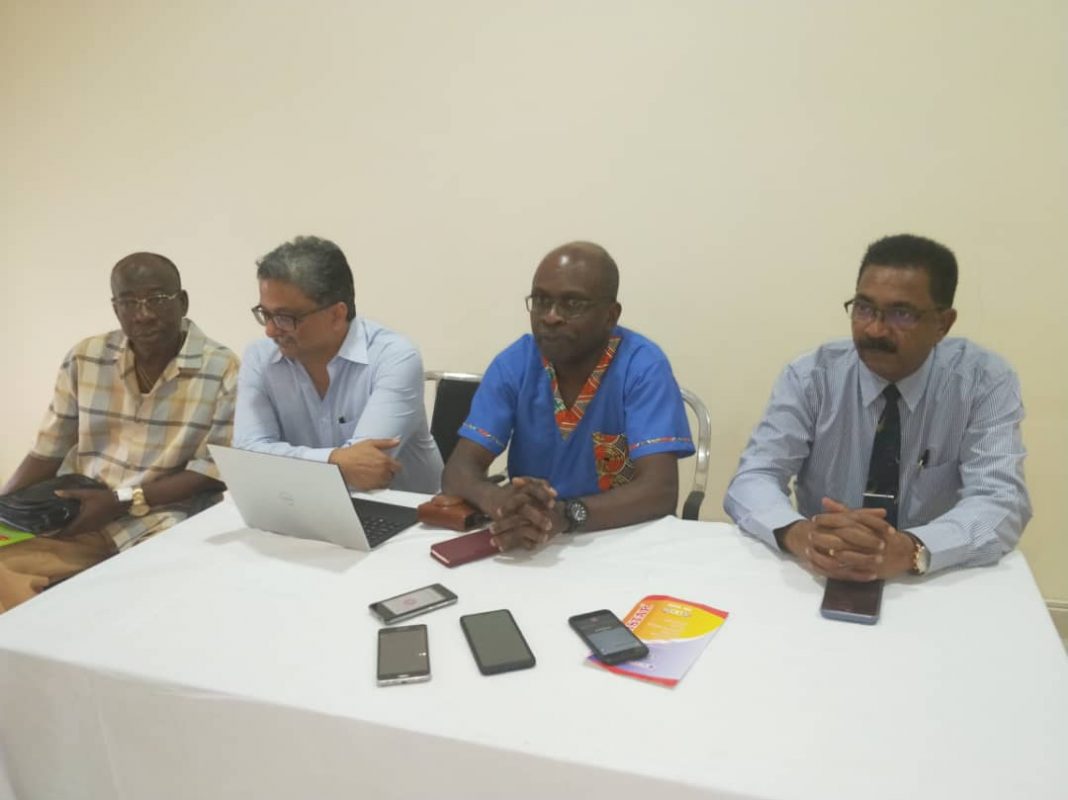 Choithram Memorial Hospital, one of Sierra Leone’s leading hospitals, situated at Hill Station in partnership with the British Society of Gastroenterology which is headed by Dr. David Nylender were able to save the life of a colon cancer patient, thanks to the availability of an endoscopy equipment at the facility.

Endoscopy is a non-surgical procedure used to examine a person’s digestive tract. Using an endoscope, having a flexible tube with a light and camera attached to it, a doctor can view pictures of someone’s digestive tract on a colour TV monitor.

During an upper endoscopy, an endoscope is easily passed through the mouth and throat and into the oesophagus, allowing the doctor to view the oesophagus, stomach and upper part of the small intestine.

Similarly, endoscopes can be passed into the large intestine (colon) through the rectum to examine this area of the intestine. This procedure is called sigmoidoscopy or colonoscopy depending on how far up the colon is examined.

Speaking on their work, Dr. Nylender revealed that as an organisation their focus is to teach any aspect of gastroenterology in a resource poor country, adding that they were able to obtain a grant which was not to buy equipment, but to pay for travel and teaching aids. His job was to diagnose ulcers and prevent cancers. He realised that Sierra Leone lacks the resources to deal with any endoscopy cases. As a result he decided to concentrate in that area. He further disclosed that Dr. Gordon Harris in Sierra Leone told him, while he was on holiday in the country, that Choithram has an old endoscopy machine.

After visiting the Management of Choithram, he had the opportunity to fix the old one and decided to teach doctors on Endoscopy. In 2015, whilst on holiday, he was able to mobilise 4 doctors from the National Faculty of Trainers in the UK to come to Sierra Leone and impart knowledge on endoscopy. After proper scrutiny of interested doctors by Dr. Gordon Harris and team, 3 doctors were chosen to do the training.

They held teaching courses for the three doctors in Sierra Leone on Endoscopy and he is proud that today the life of a colon cancer patient has been saved through their efforts. He also disclosed that during the training they had 15 patients who had agreed to be part of the training and went through the process. He explained that at the initial stage, the doctors worked on dummies and after much practice they were able to translate their knowledge on humans. The set up was like this: one doctor did the endoscopy; another did a WhatsApp video recording, whilst the third guided the first doctor through the procedure.

Dr. Nylender further stressed that what was agreed on was that no one doctor is allowed to practice alone and the video taken throughout the whole process was reviewed by way of feedback. On their return to the UK, the three Sierra Leonean doctors continued the work and have done over 400 cases. Each case has been recorded and sent back to them in the UK for review and a report sent back. This peer to peer review has further boost the confidence of the doctors. He further maintained that during the training though 80 procedures were done each doctor experienced 240 procedures.

He further stated that Harrish Agnani of Choithram consented to send one of the doctors to the UK, where she displayed exemplary knowledge of the practice and this has fuelled the medical system there to design an implementation of similar training in other parts of the UK.

Dr. Nylender said that the saying that colon cancer is rare or non-existent in sub Saharan Africa; is now false as there are now cases of people with the disease. He disclosed that out of 12 patients screened in Sierra Leone last year, 3 had colon cancers, three others had conditions leading to cancer. Out of the 3 diagnosed with colon cancer, two have died and only one Mr. Thomas Nicolson is the survivor. He however disclosed that Choithram has now procured new Endoscopy equipment known now as ‘life-saving’ equipment.

He related an incident where doctors in Sierra Leone called them about a patient who had hepatitis B and sclerosis of the liver and was bleeding profusely. They were called and the details made known to them through WhatsApp video. They were able to guide the doctors on what to do to handle the situation. The bleeding stopped. He hastened to say that during the training they taught them about handling bleeding but not one of this nature. He was pleased to inform the media that another similar case was handled perfectly by the Sierra Leonean doctors without recourse to them.

Mr. Harrish Agnani and Dr. Gowrinath M. George, Medical Superintendent of Choithram said that the hospital now has modern equipment that can do endoscopy with ease and there are experts at the hospital who are able to handle the equipment. He encouraged Sierra Leoneans to come and visit the hospital and have their status known and proper screening done, including treatment at a much lower cost than the cost of going to India, USA and the UK.

Concluding, Dr. Nylender said that it is not every pain that one experiences in the stomach is ulcer; some may be associated with colon cancer and those symptoms, when diagnosed early through endoscopy will save lives, but if left too late the patient will eventually die. He called on the Government of Sierra Leone to invest the endoscope equipment which is in the possession of Choithram in order to save lives. He maintained that they are always ready to provide their medical expertise in terms of giving out free trainings to doctors on how to operate the equipment and make effectively use of it.