Christians, Muslims and other religious denominations have viewed with a dim light the declaration by the Ministry of Social Welfare that Churches, Mosques and others that worship in congregations must henceforth suspend all services.

It is the opinion of many that the Ministry’s pronouncement is a bit high-handed, as the President in his proclamation stated that people can congregate but not above 100.

Some have opined that since the proclamations do not have the approval of Parliamentarians, they do not have the force of law but are discretionary. Others maintain that the Government has no right, no power to proscribe the people’s right to assembly and worship that are enshrined in the 1991 constitution.

Others argue that they see no reason why the Government should be in a panic mode when the corona virus has not entered the country. “We cannot take God out of the equation if we are to successfully ward off the virus,” a man of God said, “The more we pray together as one, the more God will answer to us,” he added.

He quoted Psalm 127:1 – “Except the Lord build the house, they labour in vain that build it: except the Lord keep the city, the watchman waketh but in vain.”

As far as he is concerned, the hygiene measures should go along with congregational worship because God has said that wherever two or three are gathered in His name, there His spirit is.

Furthermore, those who oppose the ban on congregational worship argue that unlike the Ebola virus, there is no evidence that it is a virus that is transmitted by touch. 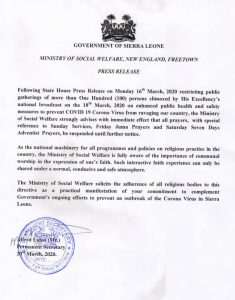