The Deputy Minister of Youth Affairs, Lusine Kallon, recently led a campaign to sensitize young people on abstinence and the need to continue regular hand washing. He made this move in the wake of a broadcast by the President, His Excellency Dr. Julius Maada Bio on the Government’s preparedness to fight the deadly Corona Virus Disease (COVID-19).

In the company of journalists, Western Area District Youth Council Chairman and some senior staff of the Ministry of Youth Affairs. Lusine Kallon engaged traditional leaders; Members of Parliament; Councilors; Religious leaders; School authorities and youth based organizations in Moyamba District. In as much as the country has not reported a single case, the sensitization and awareness raising campaign on the Coronavirus, according to the Deputy Minister, will not only be limited to the South but the entire Eastern province of Sierra Leone.

He said the Coronavirus disease started in Wuhan province of China and killed over 250 Chinese before being declared as a global pandemic by the World Health Organization. He said WHO has further described it as an emergency pandemic because it has quickly spread across the globe by infecting hundreds of thousands of people.  He also told the people of Moyamba that Coronavirus is real and deadly and spread through body contacts, hand shaking, coughing or sneezing in the air but the real symptom emerges within the 14 days incubation period. He therefore warned that the people should desist from those traditional practices of sharing pleasantries through hugging and hand shaking as a preventive measure to fight the disease in the country.

He said there is currently no vaccine to cure the viral disease but adhering to preventive measures being put in place by the Government will protect citizens from being infected by the virus.

According to the Deputy Minister of Youth Affairs, Sierra Leone is not fully safe because neighboring countries such as Guinea and Liberia have reported cases.

“Despite this scaring news, I am joining the President to allay your fears and say no need to panic,” Hon. Kallon asserted but strongly admonished them to desist from what he called, “Pepper Doctor” and encouraged them to promptly report cases or any case similar to Coronavirus disease. He also announced the toll free number, 117 which is free and always susceptible to response from medical practitioners.

He encouraged them to start regular hand washing and restrict themselves from public gatherings.

The Western Area District Youth Council Chairman, Tejan Kellah, said he was happy to be part of the campaign as young people are always vulnerable when it comes to crisis. He called on young people to support the Government as President Bio values the life of every Sierra Leonean devoid of regional or ethnic backgrounds.

The campaign targeted 14 Chiefdoms where traditional leaders were encouraged to enforce the Presidential directives and urged to prescribe punitive action for defaulters.

On his part, the District Youth Council Chairman, Joseph Mbogba, said to enforce the Presidential directives, they are going to close all “loomas” (public markets) and institute the use of regular hand washing in all public places. He commended the Deputy Minister of Youth Affairs for being steadfast to reinvigorate the campaign across the region.

He assured that they will deploy energetic youths in all border crossing points to strengthen their surveillance and enforcement of President Bio’s directives to fight the disease. 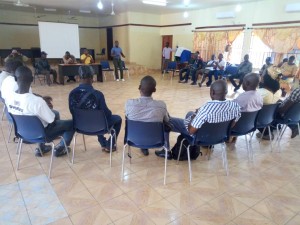