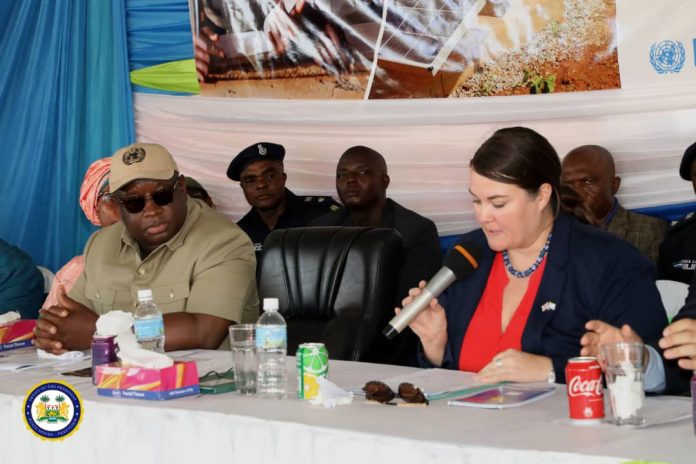 Petifu is a rural town in northern Sierra Leone that lies about 20 miles to Lungi, home to the international airport that serves the West African nation.

The project, which was designed to target 94 communities across the country, was supported by the Department for International Development, DfID, in the United Kingdom to support mini-grid operators toward the provision of commercially viable energy services in rural communities.

During the symbolic turning-on ceremony of the light, Minister of Energy, Alhaji Kanja Sesay, said that the event was a significant milestone that marked the start of the provision of electricity across the country in fulfilment of the President’s pledge to increase energy access through renewables.

Resident Coordinator for the United Nations, Sunil Saigal, said that he was honoured to witness the demonstration of what was a result of effective collaboration between the government and its partners. He said the government had shown commitment to deliver development result which would improve the welfare of Sierra Leoneans.

Head of DfID in Sierra Leone, Kobi Bentley, said that the event was significant because it celebrated the fact that electricity generated through solar power and transmitted through local mini-grids was now available in 54 rural communities across the country. She said that the project would run for the next two years and was expecting mini-grids to be provided in additional 40 larger rural towns and villages across the country.

In his address, President Bio said that the project aligned with his Government’s commitment to producing cleaner, cheaper and more inclusive energy in rural communities across the country, adding that they were also determined to meet the United Nations Sustainable Development Goal 7 – producing modern energy for all.

He said that the project would also support his Government’s human capital development drive by playing an important role in the storage of vaccines and other medications in health centres, increase the study time at schools and homes and also provide additional resources through technology.

“This project will help support small scale enterprises by stimulating economic activities and will also help agricultural activities through the preservation of foodstuffs. We will replicate and promote this RREP model and extend energy access to more Sierra Leoneans,” he assured.

For the Housemates to Continue their Amazing Journey Our Votes Really...