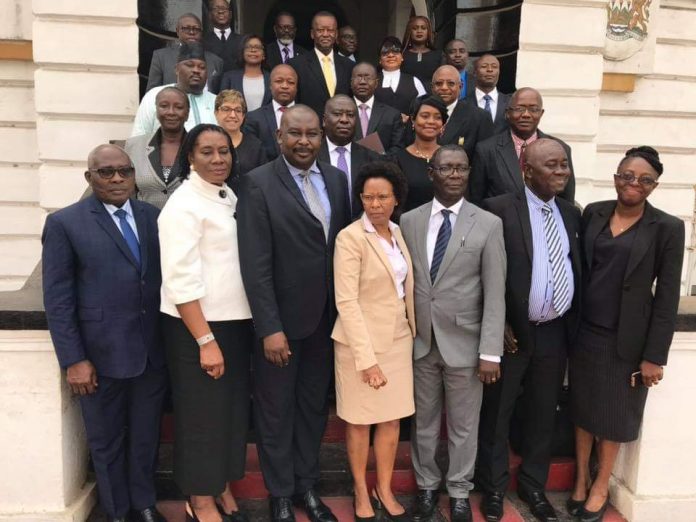 Hon. Justice Desmond Babatunda Edwards, who is the Chief Justice of the Republic of Sierra Leone on t Friday 15th March 2019, held dialogue meeting with the President, Judges and support staff of the ECOWAS Community Court at his chambers, Main Law Court Building, Siaka Steven Street in Freetown.
Speaking to the Hon. Chief Justice and other Judges of the Superior Court of Judicature, the President of the Court Hon. Justice Edward A. Asante said the ECOWAS Community Court of Justice is an organ of the Economic Community of West Africa States (ECOWAS), a regional integration community of fifteen (15) member states in Western Africa. He revealed that the Court was created pursuant to the provisions of Article 6 and 15 of the Revised Treaty of the Economic Community of West Africa States (ECOWAS).
Commenting on the jurisdiction and enforcement of the Court, President Edward A. Asante said, the court deals with administrative tribunal for ECOWAS, human rights, arbitration and inter-state dispute resolution tribunal. He said the court also consider cases brought by individuals on application for relief for violation of human rights, individual and cooperate bodies to determine as to whether their rights have been violated by an ECOWAS official etc.
He said the decision of the court is final and enforcement of court’s decisions has been one of the biggest challenges. Hon. Justice Edward A. Asante said enforcement of Court’s decisions is one of the reasons for their trip to Sierra Leone. He said Article 24(4) and (3) of the Supplementary Protocol of the ECOWAS Court provides that “Execution of any judgment of the Court shall be in the form of a writ of execution, which should be submitted by the Registrar of the Court to relevant member State for execution according to the rule of civil procedure of that member state.’ He said execution is done upon verification by the appointed authority of recipient that the writ is from the court and the writ shall be enforced.
Hon. Justice Edward A. Asante beseeched the Hon Chief Justice to meet with the Attorney General and Minister of Justice to select someone who will be approved to serve as focal person, and whose job will be to enforce orders of the court.
In his comment, the Hon Chief Justice Hon. Justice Desmond Babatunda Edwards thanked the President and team from the ECOWAS Community Court for what he described as timely and educative dialogue. He affirmed that he himself and other judges had learned so much on the operations of the court and that they now have the appetite to go more into the ECOWAS Court and its operations. He promised the team that he will ensure that, their request is effectively communicated to the relevant Ministries so that enforcement concerns will be addressed. The dialogue meeting ended with photos taken.
Hon. Justices of the ECOWAS Community Court posed with Sierra Leone Chief Justice and Judges of the Judiciary of Sierra Leone.