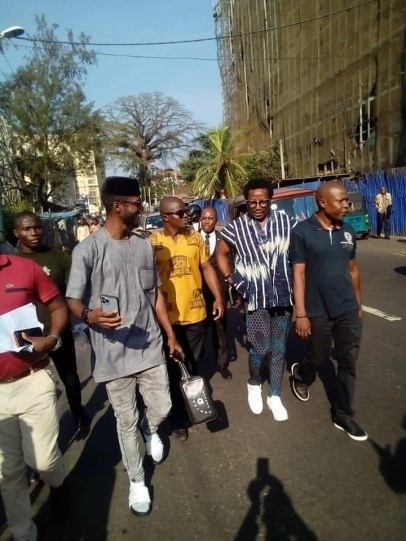 High Court Judge, Hon. Justice Adrian Fisher, has on the 20th January, 2023 suspended the Committal to prison of the Director of Native Consortium and Research Center, Edmund Abu Jnr. for twelve (12) months on condition that he doesn’t repeat his conduct for which he was committed.

Before Edmund Abu’s open apology in Court, the Judge said, “I have listened carefully to the pleas in mitigation by Lawyer Jengo and taken into account the apology tendered by the contemnor and upon his undertaking not to repeat the conduct for which he was committed and   in accordance with Order 51 Rule 6 sub Rules 1 and 2 of the High Court Rules 2007, I shall make the following orders:

That the order of committal of  Edmund Abu Jr to prison for 21 days is suspended for a period of twelve months from the date of this order, on condition that Edmund Abu Jr does not repeat his conduct. Should there be any further conduct amounting to contempt of court, additional contempt proceedings would be instituted against Mr Abu for this contempt in addition to the new occurrences of contempt.

Secondly, that the undersheriff of the High Court shall serve a copy of the order on the contemnor, Edmund Abu Jr, forthwith and prior to his release from custody, in accordance with the provisions of Order 51 rule 6 sub rule 2 of the High Court Rules 2007.

That thirdly, there shall be no orders as to costs.

The full Judgment is on the website of the Judiciary: www.judiciary.gov.sl.