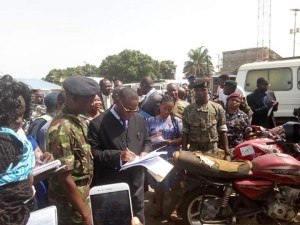 A notice released by the Secretariat in the Government Commissions of inquiry (COI) has issued a notice hearing to senior former Ministers in the Ministry of Mines and Mineral Resources in the Past Koroma Administration to appear before Justice Biobele Gorgewill Commission on Tuesday 8th April .
The former ministers include Alhaji B. Kanu, former Minister Mines and Marine Resources 2009, Alhaji Minkailu Mansaray former Minister of Mines and Marine resources 2010, Abdul Ignosis Koroma, former deputy Minister of Mines and Mr. Sahr Wonday (former Director General of National Mineral Agency) respectively.
‘’Take notice that the justice Biobele Georgewill Commission’s Of Inquiry will on the 8th Day of April be receiving testimonies from witnesses , whose testimonies are likely to touch and concern your conduct as persons of interest to the said commissions on issues pertaining to the Ministry of Mines and Marine Resources and the National Mineral Agency respectively,’’ the notice stated.
According to the notice from the Commissions of Inquiry Secretariat, the former senior government officials are requested to attend on the 8th April and to avail themselves with opportunity to cross examine the said witnesses on any of their testimonies that relates to their person.
It could be recalled that when President Bio assumed office he set up a Government Transition Team to look into the activities of past Koroma administration release the Government Transition Report (GTR) which recommended for a setting up of the COI.
Justice Biobele Georgewill visited Cockerill this morning where ambulances and motorbikes used for the Ebola response are still parked.

This on d spot visit is part of the Commission’s investigation into the Ebola fight.

Fmr Minister of Health Madina Rahman and Former NERC boss Paolo Conteh are the persons of interest in this case.