His Excellency Former President Ernest Bai Koroma of the Republic of Sierra Leone has enthralled the world at Horasis Global Meeting, Cascais which started on the 6thApril 2019 and ended on the 9th April 2019.

This was what he told the world:

Thank you for your kind introduction, Mr. Zimmerman, thank you to Dr. Richter and his great team, for the invitation to the 2019 Horasis Leading Global Change. This is my first trip to Portugal, yet it feels wonderful being here with all of you. Interestingly, the name of my country Sierra Leone, dates back to 1462, when a Portuguese explorer, Pedro Di Cintra, sailed down the coast of West Africa.

I am therefore grateful for the opportunity to be here to exchange ideas on ‘how we could work together to wage peace more effectively’.

The literature shows that the drivers of tomorrow’s conflicts are already impacting us. From climate change to human trafficking, to disorderly migration, religious and political extremism, to the rogue application of information and communication technology; today’s conflicts are generally global, more complex and more persistence.

The World Bank estimates that about 2 billion people live in countries affected by conflict; costing the world in excess of $10 trillion yearly.

This constitutes a direct risk to the aspirations of the Sustainable Development Goals and it has been amply reinforced by the devastation occasioned by extreme alterations in the climate which we witnessed recently in Mozambique and its Southern African neighbours. In no lesser magnitude, fires, hurricanes, floods, in practically every region of the world, have been unforgiving as drought and desertification have been merciless in causing famine for thousands in the Sahel.

This discussion therefore, could not have come at a more opportune time given the current realities we are faced with.

I have used the phrase ‘our world’ deliberately to underscore the important fact that distance and boundaries no longer serve as sufficient restrain; that we are bound together not only by geography but also by history of common challenges and shared interests; and that our interconnectedness as a global village requires us to pull together in harmony and in peace.
The problem however is that:
• • •
Obsession with self-preservation, bullying and the absence of consensus building; Anxiety about protecting political power over and above addressing social and economic disparities;
Persecution of political opponents through manipulation of public opinion using unbridle propaganda and fake news are no doubt bringing the world closer to a new cold war – making the achievement of peace ever elusive.

How do we address these? First, by accepting that war and insecurity in whatever form is costly, retrogressive and can only bring suffering and disruptions; no matter your region, religious beliefs, ethnicity or political persuasion. The waves of immigrants towards Europe are a stark reminder of this fact.

Second, we should seek sustainable ways to promote peace in a truly innovative and collaborative way. The Paris Agreement, in spite of whatever challenges it may have, if made truly functional, should be a good example of how the world could work together for the common good.

Further, there is a need to redouble efforts on improving the general welfare of the world populace by striving to address the challenge of income disparity.

We should also deepen trust between the citizenry, especially the youths and governments by discouraging fake news and maligning of opponents.

Promoting intergenerational exchange to consolidate peace requires opening the political space by encouraging genuine inclusiveness in governance – no community, country or region should be made to feel too small or inadequate to be accorded its rightful place in society;

It is also critical to enhance access to justice, transparent and accountable leadership, as well as building and integrating a culture of peace over violence through monitoring and evaluation.

In all of these, rebuilding infrastructure represents a critical pathway to peace and the restoration or establishment of the rule of law because ultimately, people need access to markets to restore economic growth which generates the preconditions for peace and reconstruction.

I have leveraged on those principles during my ten years as president of the Republic of Sierra Leone and in my contribution to the West African regional mediation efforts of the political conflicts in Ivory Coast, Guinea Bissau, and in the Gambia.

I am proud that during my tenure, Sierra Leone, once devasted by conflict, enjoyed national cohesion, became the most peaceful since independence to the extent that we ‘exported’ peace by deploying our police and military as part of the African Union and United Nations Peace Keeping Missions in Sudan, Somalia and Mali. We also gained Grade A Status at the United Nations Human Rights Council, and by the time I left office, the International Peace Index ranked Sierra Leone as the most peaceful in West Africa and the third most peaceful in Africa.

How could Europe and Africa collaborate? I subscribe to the creation of a West African Peace Engineering- Corps or African Union Peace Engineering – Corps in which African soldiers would work together with a proposed European Peace Engineering Corps to build civilian infrastructure like water and sewage systems, solar power systems, or forest regeneration projects. While this would increase access to services, contribute to the preservation of the environment, it would also invariably increase the proportion of a nation’s soldiers toward waging peace instead of in preparing for war. These projects will be inspired and guided by the United Nations 2030 Sustainable Development Goals.

Further, we should encourage amongst the youth as well as in an intergenerational teamwork, problem-solving, and personal initiative training courses which will put young people through intensive experimental training programmes in which they learn teamwork, problem- solving, and self-discipline in the context of a culture of peace.

Finally, there should be increased emphasis on early mediation of budding political conflicts to avoid an escalation. We are in this together, our destinies are bound together by nature and globalization. We cannot run away from our common heritage. We owe it to ourselves and to future generations to work together in making our world a better place for everyone.

Distinguished ladies and gentlemen, I look forward to our time together.

Thank you for your attention. 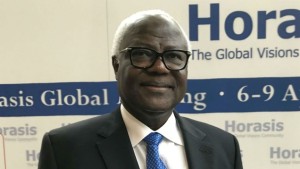