As she continues to support less privileged children, especially girls in Sierra Leone, Founder/Executive Director of Angels to Angels-Sierra Leone, Fatu Quine Sesay, has been nominated among several other female personalities for this year’s Fifty Most Influential Sierra Leonean Women Award 2020 which was launched on the 8th February 2020 by the Country Representative of the United Nations Entity for Women (UN Women) Dr. Mary Okumu.

The Grand Awards Ceremony and Dinner is scheduled to take place on Saturday 28th March 2019, at the prestigious Bintumani Conference Center in Freetown.

It indeed came as no surprise that Fatu Quine Sesay was nominated as she has immensely contributed in many ways to the development of children in Sierra Leone as currently her organization is supporting over 100 less privileged girls across the country in 46 different schools in Freetown, Bo, Kenema, Tombo and Makeni.

Fatu Quine Sesay is the Founder/ Executive Director of Angels to Angels Sierra Leone (A2A) a US based non-profit organization developed by a group of visionary women with the aim of improving educational opportunities for girls in Sierra Leone which they have been doing for the past 10 years of existence.

Prior to her nomination, her organization was awarded by one of the leading child advocacy organizations in the country, Kids Advocacy Network Sierra Leone (KAN-SL) with the National Child Development Prestigious Award 2019 for the organization’s relentless efforts and excellent service delivery to the children of Sierra Leone.

Many that this medium engaged to comment on the nomination of Fatu Quine Sesay opined that she deserves it based on her tremendous work she has been doing to promote the development of children in the country. Some have even positively predicted that Fatu Quine Sesay will surely emerge victorious to bag the covetous award.

Members of the public can vote for Fatu Quine Sesay by sending 029 to 5353 using Orange or Qcell networks as voting commences today, the 14th February 2020 and ends on the 14th March 2020. 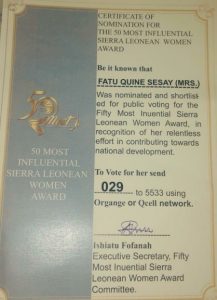