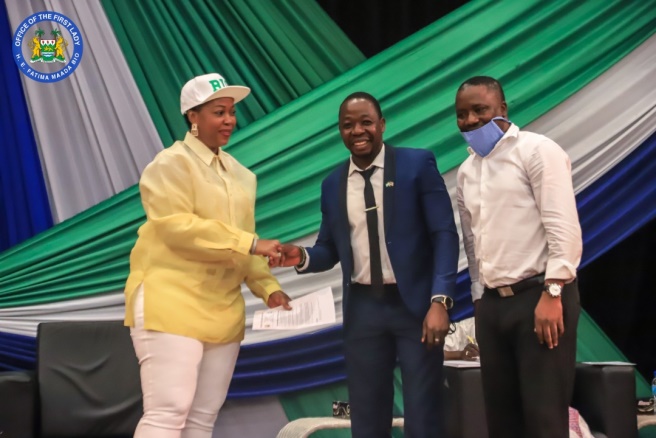 The Ministry of Youth Affairs in collaboration with youth sector appreciated Her Excellency the First Lady of the Republic of Sierra Leone, Madam Fatima Maada Bio for gracing their Award ceremony and official Launch of the partnership with Youth Champions for Hands off Our Girls campaign.

Her Excellency the First Lady of the Republic of Sierra Leone Madam Fatima Maada Bio thanked the President for providing her with the space to champion a national campaign of that nature, saying that that was indicative of his commitment to protecting the wellbeing of women and girls in the country.

She commended the Government of her Husband for the motivation to embark on such a laudable campaign. Her Excellency First Lady Fatima Bio narrated an emotional personal story, recalling that, because of their culture, at age 12 a suitor had already been identified for her. She spoke of the ordeal that she went through in trying to challenge that culture, especially with her father.

She also told the audience how she escaped the early marriage by traveling to London. Fatima Bio also said that she was inspired to embark on the advocacy campaign because of the passion of her husband to protect women and girls in Sierra Leone. She narrated that before her husband became President, he would complain to her about many incidents of rape and other forms of violence against girls and women in Sierra Leone.

“I have advocated for women and children since my teenage years. When I met my husband, I fell in love with him and his amazing vision for Sierra Leone. My work revolves around his vision, and I get 100% support from him. For sustainable development, everyone must be empowered, especially our women and children,” She mentioned.

She also called on parents and guardians to provide the required leadership that would enable children to become productive citizens in society. She said early marriage and teenage pregnancy were detrimental to the growth of girls for which she frowned at parents and guardians who had encouraged such practices.

UN Women Country Representative to Sierra Leone, Dr Mary Okumu, congratulated the First Lady on the successful launch of the “Hands off our Girls’’ across the country, as the name Hands off our girls says it all, “don’t touch” she says adding that that was a sign of her determination to empower women and girls. She said the UN is fully in support of the initiative and assured of their continued support to its implementation.

The Minister of Social Welfare Baindu Dassama Kamara said their work is to help people manage their daily life and understand their problems, and cope with the challenges they face in life, she said they are also working tirelessly with the first lady as she is presently championing their mandate with a bigger platform, adding that they have also attached social workers to the FSU to jointly investigate SGBV as a way of helping in the fight against sexual gender-based violence.

The Minister of Gender and Children’s Affairs Manty Tarawalli said in response to the rise in cases of SGBV against women, HE the President made two significant interventions to control the situation, one by amending the sexual offenses act of 2012 and two by creating the gender ministry and giving them the mandate to address the issues on violence against women and children as a way to create sustainable change, so that there will be an effective functional system even after their term of office.

The Minister of Youth, Mohamed Bangura said they are working closely with communities to ensure work at that level is very easy. He said they have a very formidable and productive dealing with youth issues and have all that it takes to change the narrative of youths in the country, and they are working closely with the hands of our girl’s campaign, because most of the victims fall within their ministry.