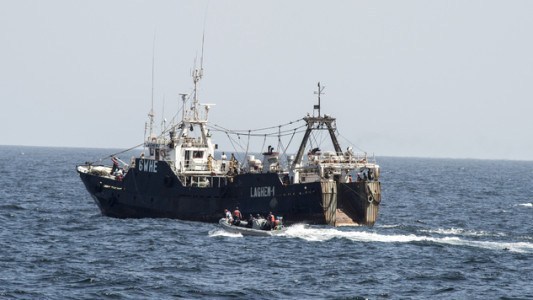 A 30-day ban imposed on industrial fishing in Sierra Leone began on Monday. During the ‘Closure Season’ period, only artisanal fisher folks will be allowed to fish on the country’s waters.
The Ministry of Fisheries and Marine Resources said the move is meant to protect the country’s fish stock from depletion.
Sierra Leone, like many African countries, relies almost entirely on fish for its major source of protein. Yet fish has become expensive for most of the local population.
Local fisher folks accuse industrial fishing companies of overfishing and use of prohibited fishing gears.
In a statement issued by the Ministry, it outlined a series of measures it said would be taking during the ‘close season’ period, including a ban on all industrial fishing and a ban on export from both industrial and fish processing plants by land, sea or air.
It said artisanal fishing groups will ensure that all fishes caught in the country’s waters are sold to the local market.
“Industrial fishing companies should stock their cold rooms with different fish species (the number of fish to be stocked by each company will be calculated based on the number of fishing vessels operated by these companies). This is to ensure that there is no shortage of fish in the market,” it said, adding that the ministry will work closely with its stakeholders to intensify monitoring and surveillance and ensure of our waters o ensure compliance.”
The ministry also urged agents in the distribution line to ensure that fish prices do not go up during the period.
Sierra Leone, alongside Senegal, Gambia, Guinea-Bissau and Guinea are said to have lost about $2.3 billion a year from 2010 to 2016 due to illegal and undeclared fishing, according to the environmental watch group, Greenpeace.
Fishing boats from China and Korea are especially accused of engaging in these illegal fishing activities.